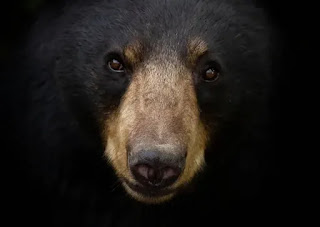 I was a little surprised to read that a black bear attacked a girl in the Great Smokey Mountains, which admittedly is some distance from us.
When we lived in the woods, black bears were not an uncommon. They even make their way into town sometimes. They are generally not aggressive, and easily scared off by a dog or a loud woman brandishing a broom.
(Yes. I have a broom. Why do you ask?)

Once did I come across one that I did not want to tangle with. I was doing homework for a course I was taking, and I heard the garbage can rattle outside the sliding glass door. I got up from the computer and switched on the light and was greeted by a large head over my trash can. Usual protocol for me would be to go outside, yelling loudly. The usual protocol for the bear would be to go gallumping off into the jing weeds to watch from the brush line while I carried the garbage can into the basement and locked the door. Disappointed, he'd shuffle off to visit another house.
But this bear looked up at me on the deck and growled, which had never happened before.
I decided not to bicker with him. Easier to clean up the garbage the next morning.
But that kind of behavior is not characteristic of our bears. Despite their size, they are generally mild mannered. They have very poor eyesight, and we've had them cross right in front of us and never realize that we were there. When they lose their fear of humans and become bold, that is generally when the problems start.
It also occurs to me that when humans lose their fear of bears...
Loud women with brooms may not be the brightest crayons in the box.
Posted by Debby at 11:26 PM