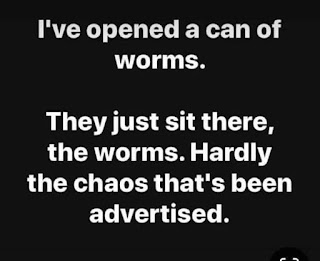 When I got home Monday, I hit the ground running. I was running the washing machine, and then got the idea to run over to the laundromat to wash our comforter. My idea was that we were not going to need it anymore this season. (Which is why it is why it got down to the 40s last night.) It's been a long time since I'd used a laundromat, but the comforter was too big and heavy for my washer.

I also ran to the store and bought new bathroom rugs and a new mattress pad.

Tim took me out for supper. A strange thing happened. Someone we used to know was behind us. She's not a nice person, although people seem to think she is. She's a malicious gossip, one of those people who seem to thrive on making trouble. The first thing that I thought, is 'It figures!' The day when I'm especially untidy and windblown and tired and looking my very worst, we run into someone like her.

Tim placed his order and we got our drinks. He was waiting for his meal. I was not hungry. As we sat at the table, he gave a quick look around.

He said that he was looking for the woman.

I told him that she was sitting at a table behind us, but it surprised me that he was looking for her.

The next day as I worked, it kept coming back to me, the look on his face.

Neither one of us are especially well endowed with self esteem. He is a quiet man who had a pretty rough upbringing. A bad marriage and the ensuing bitterness made things worse. He never learned to stand up for himself, and if he did, he was swiftly slapped back down.

We've been married 23 years now, and I feel like I know him better than anyone else, and I kept thinking about that look on his face. I felt like there was something that I'd missed. That night, when I came home, we ate our salads.

He looked at me nervously. If there's anything he hates, it's being told we need to talk. It's guaranteed to clam him up like nothing else.

I asked him why it bothered him so much to see the woman in the restaurant.

He chewed thoughtfully. "I just don't like people like that. I don't want to be around them."

I said, "Tim, has anybody ever told you that you have won that?"

"All the things that she ran her mouth about, that her husband ran his mouth about, you've put all that to rest. You have a good job. You make good money. You built a business with your own two hands, and it is a successful business that has opened a lot of doors to us. You are a generous man. You have never taken from others. You have never asked anything from anyone. You're taught yourself how to do almost anything. You've done right by our children. You are a good person. She can say all she wants, and truth be told, if she's running around saying anything at all, it's that your wife is ugly."

He sat listening carefully, looking at me, his face very still. It was obvious that he did not know.

I felt ashamed that it has just now occurred to me to say it out loud.

I'm back to work and we're working mandatory 10 hour days and Saturdays. I sure am glad that I came home and went into a cleaning frenzy. Lord knows when I will get my next chance to get the house in order.

I am reading 'Perfect'. It is one of those uncomplicated books that I can read on work breaks, and I am really intrigued by it.

As I walked in the door tonight, the weatherman was talking about frost warnings. In June. Honestly! If my tomatoes and peppers freeze, I'm going to be upset.