Woodchucks have been a big problem for me and my cucumbers, so when I read about growing cucumbers using the Kratky method, my first thought was "hey! If I got two barrels and grew four plants hydroponically, I would be able to keep the vines from the ground and out of reach of the darned woodchucks!" And as stupid as it sounds that was my primary reason for trying this method out. The secondary reason was that they are claiming 60 cucumbers or more per plant. 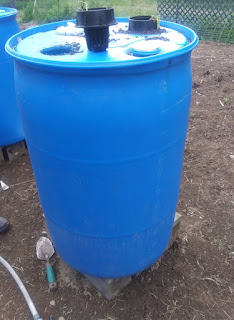 We started out with two barrels. Make sure that you use food grade barrels. We bought them for $20 a piece. The most important thing is to get the barrels level. We used a level and concrete blocks. Once the vines take off, we have reinforced trellis to span the barrels like a bridge, and we will try to keep the majority of the vines on top of the barrels. 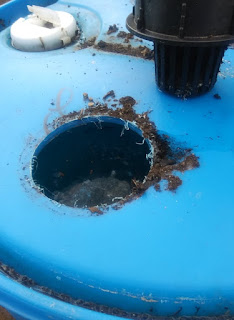 Using a hole saw attachment to his drill, Tim made four holes (two in each barrel). 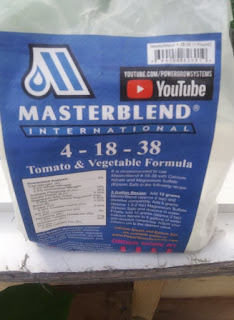 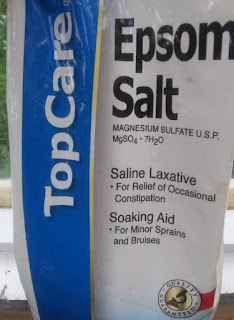 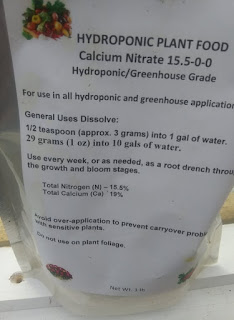 1/3 cup of this.
Add the nutrients to the barrel and then fill the barrel with water. The water from the hose will mix the nutrients well. You want the water to reach the bottom of the cup that holds your seedling, The bottom should sit no more than 1/8th inch deep in water. 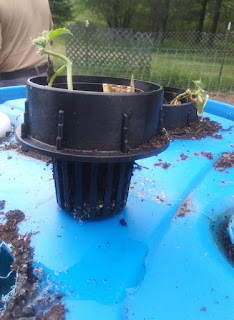 Tim bought these instead of the net cups recommended, which were pretty flimsy. They are strainers designed to go into flexible drainage pipe to strain debris from the water being drained. They were almost $7 each, which horrified me, but he is right. We'll be growing cucumbers for the rest of our lives with this equipment. 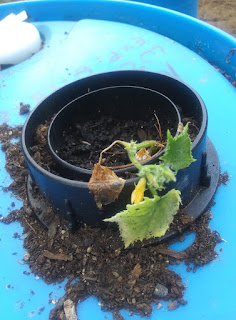 This is the strainer set into the 4 inch hole. See my pathetic cucumbers? The bucket for the drip irrigation system in the green house managed to tip over and crush my cucumbers. What was left was tiny and I was not at all sure that they would survive. 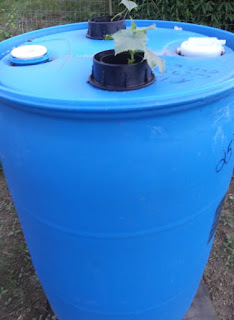 This is after a week. They look a bit more promising, but to be honest, I was still not at all sure that they were going to do anything. 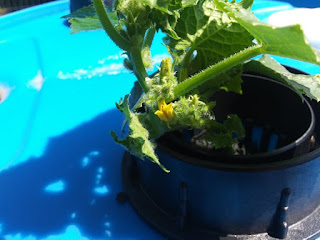 This is after three weeks (I forgot my phone last weekend) They are looking a lot better. We did lose one of the plants, but to be honest, they had been badly crushed and I think it is kind of miraculous that we only lost the one. 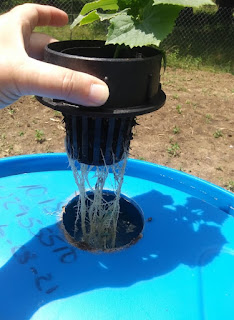 This is the root system. The roots are seeking the water, and will eventually take over the barrel.
So that is my experiment so far. I let you know more, but I do think that things look promising at this point. Northsider, I want to point out that they grow cucumbers like this in polytunnels, so you might be able to have cucumbers all winter long with this method. I'd be interested to hear if you try it. 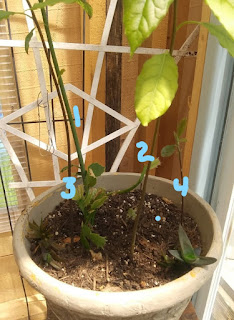 This is the start of an avocado jungle. I had one avocado tree and was very excited. Suddenly, there were two. I took them up to the greenhouse for the summer, and when I went up the following week, there were three. Now there are four. They are growing like crazy. I thought I had taken a picture of the biggest one. It is up to my waist at this point. I am excited about these as well.
This weekend, I'll get pictures of the innoculated logs for the shiitake and oyster mushrooms.
Posted by Debby at 9:01 PM