I was on the other side of the house when I heard Tim. He was yelling, and he's not by nature a yeller.

Out of the yelling, I picked out the words "Get out here" and "Quick"

So I charged out thinking that something was terribly wrong. 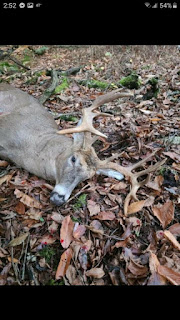 I recognized him right away. This is from one of our game cameras. See how he has a drop tine that comes down low in front of his face? That's not common. 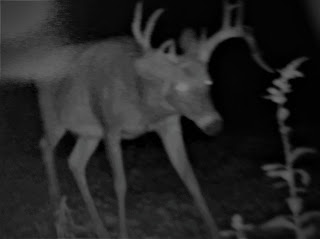 Tim saw him last year and was delighted to see that he was still in the area this year and carrying an even bigger rack.
I know that some people don't agree with hunting, but the deer population is huge here. The roads are littered with the carcasses of deer that have been hit by cars. Don't even talk to me about what they did to my raspberry runners that I was so proud of. They do tremendous crop damage on farms. In the end, when the numbers get out of control, you have a die off during a hard winter. Food is so scarce that they simply starve to death. Nature will control those numbers, but starving to death is a cruel and slow way to die,
In any case, Tim is a hunter. Venison makes up the bulk of the red meat we consume. We process the meat ourselves. Usually one deer goes straight to hamburger. The other goes to steaks and chops and roasts. Sometimes there are three deer, and we are generous in our giving to others.
Although I understand that venison must be harvested, I harbored a secret hope. This fellow was an old deer, and he was wise. He had escaped the hunters last year. I was kind of hoping he would outwit them this year as well. I wasn't trying to curse Tim or anything. After all, there are plenty of other deer in the woods. He was welcome to any one (or two, or even three) of those.
After two years of knowing he was out there, I knew that he was out there no more. Looking at the pictures, made me a little sad.
Tim studied the pictures of the other hunter with his prize. He's a simple man, but he was wallowing around in some very deep covetousness. He was sad too.
Two completely different sads though.
Posted by Debby at 6:00 AM