Tim took a day of vacation so that we could get our butcher block picked up.

Ed's comment made me laugh. He suggested that he would never have bought that, choosing to make it instead. While we were measuring it and plotting how to come back and move it the following day, a man walked by. He said, "I wouldn't pay money for something that I could build myself." When I read Ed's comment, I wondered if maybe he'd made a trip in for the sale. He would have been disappointed. His desk was sold.

I suppose that building a butcher block isn't hard to do, as far as that goes. Tim has a lot of tools, but I am going to say that he would need to purchase some tools for a job like that, clamps and planers and the like. We have none of that. He also doesn't have a workspace. Building something like that in our basement would be a big problem wrestling it back up the stairs.

I guess that woodblock says a lot about the type of people we are. We are the sort of people who save a hand hewn beam from a house built in the 1840s because:

1) the beam was repurposed, probably from an old barn. You could see where it had been notched and pegged for use in its previous incarnation.

3) the beam is maaaaaassssive. Huge. We figure that a tree that size was growing during before the Revolutionary war.

4) and the idea of touching the wood from something growing in that time frame was a marvel to us. We saved that beam, and lord knows what we're going to do with it, but...

In any case, that's the kind of people we are.

I loved the butcher block right away, and so did Tim. Simple. Sturdy. Here long before us. Will last long after we are gone. And that's the sort of stuff that catches our eye, usually.

This morning, we got up and headed out to load up our treasure. We were loading it onto our appliance dolly. A friend of Tim's hailed him and headed over, offering to lend his big burly self to the task. And the two wrangled the dolly out the front door as people stepped out of the way. Once out to our old blue truck, Tim began lifting the ramps out of the bed. A man walking by stopped to marvel at our purchase. He said, "You know, I'll bet we could just lean that dolly back against the tail gate and then lift the bottom right up. It has wheels on the back of the dolly. We could just slide it right in."

And three men stood there in the parking lot circling around.

They put their backs to it, lifted it in just like they'd been moving butcher blocks all their lives. It went up and in.

Today things were marked 30% off, which we didn't expect. I bought an old rolling pin. Tim found some corbels, 8 of them, unpainted, which he thinks would be interesting to hold up shelves. As we were carrying out the corbels, we passed by a little table several times. It had caught my eyes multiple times the first day. I was a little surprised it was still there. It sat quietly in its dusty old corner with a $45 price tag. It was surrounded by tables that were hundreds of dollars, and a great many of them had sold. It hadn't, and now it was 30% off. 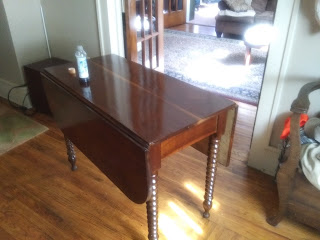 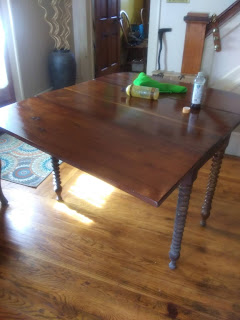 "Tim," I started, and he stopped with his armload of corbels.

"I was looking at that yesterday, he said, "I think we should get it."

And so we did. I also picked up a brand new cappuccino machine still in the box. I'll take the old one to the camp, and use the new one at home. We got off lightly. $58.10 for our purchases today.

Loading the last of the purchases on the truck two ladies walked by. I heard one of them say to the other, "I wonder if they have anything good left." I said, "Oh, there's plenty of stuff in there. We didn't take it all."

And we all laughed together.

"That was very thoughtful of you," they said. And watching us put the table on the truck, one of them said, "That cutting block is something, isn't it?" Her friend agreed.

Feeling quite happy with our truckload, we headed for home.