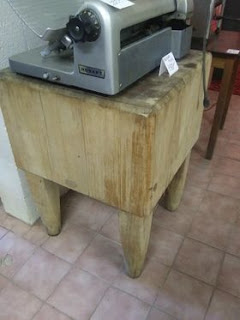 Ellie K! You give yourself a pat on the back! You correctly named that piece!

I was up and ready to go by 8:30. I got there and there was a line. A long line. Only 125 people could be in the place at a time. I waited, and I was getting a little anxious, but I made the first cut.

Not exactly knowing the layout of the building, I didn't have a clear idea of where I was headed, but I dumbed around and eventually found it. I tried to call Tim to give him one last chance to just say no, but he did not answer. I thought maybe I should wait about a half hour and try again. He would be on break and sure to answer the phone. So, I sort of looked around a bit, found a strainer that we needed for the camp...but then I noticed two guys looking at my butcher block. They were lifting the slicer and examining the top.

Afraid that I was about to miss out, I got a slip from the aproned woman walking around, headed straight for the checkout and bought it.

Quite happy, I came back to get a picture. My phone rang and it was Tim. As I discussed it with him standing close to the window. I heard someone say, "Oh no. It's sold already." That made me doubly glad I bought it.

After my phone call, I took pictures and stopped to look at a double boiler that I had not noticed. A young couple came in. The man said, "Oh look at this!" and they stopped to look at my butcher block. The woman thought it was "amazing".

Sometimes you go to these sales and it is the big ticket items that simply don't sell, but that was not the case today. The big stuff was selling like hotcakes and people seemed to be coming for specific things. A lot of the restaurant equipment was sold immediately. The leaded glass cabinets were gone. Tables were gone.

The sale started at 9. I had made my purchase by 9:15. I was out the door by 9:45.  (It was just too crowded. In these strange days, it makes me feel nervous to be around a lot of people.) Tim and I are pleased.