William is headed to middle school this year. The school is over the bridge from our house, on the other side of the Conewango Creek. To put it mildly, William is concerned about this change, because this year, WILLIAM. HAS. TO. CHANGE. CLASSROOMS. 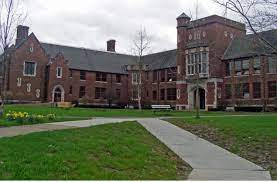 The school was built in during the Great Depression, with a government grant for the school. It provided local craftsmen with paying jobs. and it is as amazing inside as it is outside. We've been using the school's appearance in our encouraging talks with William. "I'll bet you feel just as nervous as Harry Potter did on his first day at Hogwarts!" Which led us off on a whole 'nuther tangent: 'Do you suppose there are ghosts there? That would be cool if it were haunted!'
He looked quite cheered at the thought.
We buy William a pair of sneakers every year at the beginning of the the school year. It's a tradition, I guess. So after church, I took him to our house and we waited for Grandpa to get home.
"I wish summer wasn't over," he mourned.
I told him I remembered feeling the exact same way. I didn't mention that I felt that way because I always forgot how to do division, and I was terrified that of walking into a classroom and having my secret discovered. What if that was written down on my PERMANENT RECORD???
We went out to lunch together and ate in a completely empty dining room. We had tacos and William was proving his manhood by dumping hot sauce on his. He ate two of them while sneering, "This isn't even HOT!!!"
(He drank two lemonades for no particular reason, I guess.)
He said, "I can even eat a jalapeno!" in a nonchalant way.
That's quite a man being sent off to middle school. I certainly hope they're ready for him.
After some amount of waffling, these are the sneakers he selected. 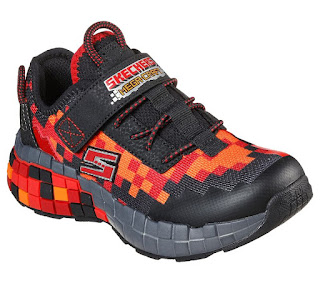 His does not have a velcro strap. That would be baby-ish, and we surely can't have that. As it went from the children's sizes to youth sizes, the strap just disappeared, luckily.
It's hard to believe he's so grown up.
Posted by Debby at 6:17 AM