Last Sunday, we went to look at a trunk on an online market place. It is covered with pressed tin in different patterns. The wood strapping is all intact. I need to polish up the hardware on it. I want to line it with a pretty paper. Tim is having a fit because he believes that will reduce the value. I want it to be pretty. I have a plan for it. I'm going to consolidate all my Christmas decorations into place. It will fit nicely under the clock in the upstairs hallway. For $25, it was a bargain. 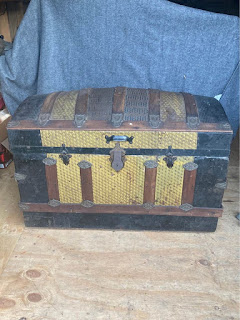 The guy was a pretty interesting fellow and he had a shed full of interesting things. Northsider? He had one of those teapots that your wife collects. He wanted $8 and I was sorely tempted, but studying, I noticed that it was pretty plain. Just a little thatched roof cottage. Not knowing her tastes, I decided against it, but I could be persuaded to run back and pick it up...just say the word!

Tim spied something tucked away in a corner that caught his eye. "What's that?" he wanted to know, and the man said, "Well that's a lightning rod. He pulled it out of its corner, went to a box, unwrapped a glass ball which dropped over top of the rod. He said, "The special thing about this is that I've got the weather vane as well," and he went to another box to retrieve it. 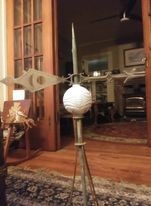 From the look on Tim's face, I knew that weather vane was coming home with us. I also knew he'd be putting it on his garage.

After 25 years, I can read the man like a book.

I could tell the man was pleased to discover a pair of customers(suckers) like us, alright. He let us know that the local town was having a sale day the following weekend, and that he'd be setting up outside with a lot more things.

And so we did.

Tim spied, with his little eye, another lightning rod/weather vane combo.
This one was smaller,

Just the right size for a green house. 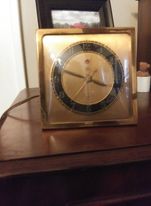 I caught sight of a brass clock. I know that I take crap pictures, but this was very hard to take a picture of because the glass in the front is convex, but it is a brass General Electric Telechron clock. I guessed from the thirties. (I was incorrect. It's a Debutant model that was produced between 1944 and 1949). 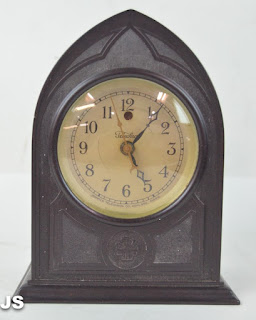 I have another General Electric Telechron in my collection with a bakelite case (see above, not my picture so you can better see the details of the face), so I recognized what the brass clock was as soon as I saw the red dot on the face of it (before the days of battery back up, this was used to let the owner know that there had been a power outage and the clock would likely need reset). I grabbed that heavy clock up and said, "Does this work?" And the man said, "Bring it over and plug it in."

Tim knew right away that clock was coming home with us.

There were other small things that we picked up stopping at the different sales.

Two books, two DVDs, a collection of burlap sacks, a new camo coat, a pair of brand name sunglasses. some saucepans for the camp, a cast iron nutcracker, a tiny little brass bird to hang on the wall, a clock from a school building for Tim's garage, a old traffic sign (also for his garage) and miniature porcelain copy of my gentleman rabbit that stands on the steps of the greenhouse.

We came home, happy with our finds. We did some finishing up work on the garage. We are a half dozen battens away from being done. Well. That and installing a lightning rod.

I spent just long enough in the garden to pick cucumbers and squashes, but there was no time for any other work, I am sad to report.