Since Kelly liked the dog carved at the end of a church pew, I thought that she'd enjoy Talbot. 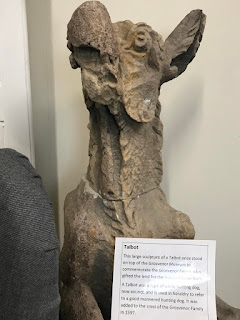 Talbot was a breed of hunting dog during the medieval times, described as a small dog with droopy ears, a long curly tail, big feet, and short legs, white in color. 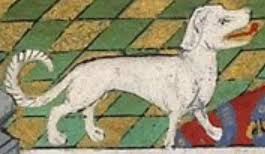 The species is now extinct, and the word has come to mean 'a good dog'.

A name for the next dog you rescue!

I have always loved Winnie the Pooh.

"If people jump out at you suddenly, that's an ambush," said Owl.

Pooh said that a gorse-bush had sprung at him one day. and he had taken six days to get all the prickles out.  ~ A.A. Milne 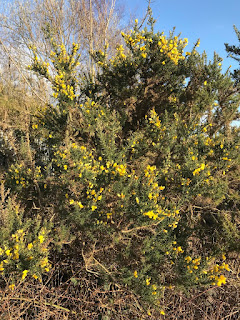 After years of reading about Pooh's struggles with gorse-bushes
I was ridiculously pleased to see one in real life.
~~~~~~~~~~~~~~~~~~~~~~~~~~
It was a momentous day for William today. He was talking to his friend when a bigger boy came up and said, "I ought to knock both your F****** heads together." His friend got an anxious look on his face. William said, "Don't worry. He won't do it."
The boy stepped forward aggressively and said, "What did you say?"
William said, "You will not knock our heads together."
The boy then began to dare him to say the word he'd left out.
William said, "I won't say the word."
The boy began to crash his shoulder against William who said in a loud voice,
"Get out of my face and quit banging into me."
The boy unleashed a tirade which was interrupted by a teacher who grabbed the kid by the arm and dragged him away. "Man, she was quick!" William said, looking amazed even still. "She came back to ask us what he was doing, we told her, and he didn't get to play any games at all during free time. He just had to sit there and think about what he did."
We've always told him that bullies are looking for a fear response, and if they don't get it, they will go away and look for a different target. It's the first time he's put that to the test, as far as I know.
~~~~~~~~~~~~~~~~~~~~~~~~
It is also a big day for Tim. It's his birthday.