This is the why Americans have to wander back home for extensive google searches and reading to sort things out.
I know who Captain Morgan is.
(Disclaimer: I have never helped him drink his rum. It would not have been fair since I never helped Jeremiah with his wine either, even though it was a mighty fine wine)
Anyhow, Captain Morgan was a pirate, and not a very nice pirate at that, although his life has been highly romanticized. He was swashing his buckle mainly in the Caribbean and owned many a slave plantation.
Leastways, that is how I understood it. 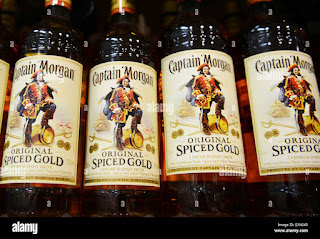 So. Imagine my surprise to be walking the walls of Chester and to climb into a tower to see a sculpture of Captain Morgan's cannon, destroyed during the English Civil war. 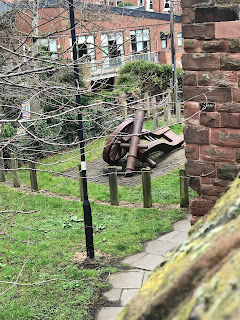 What the hey....
Now, a month after my return, I am just getting around to sorting it out. This Captain Morgan was Sir Thomas Morgan (as opposed to Henry Morgan, pirate. ). He was Welsh and loyal to the king. Just to confuse things, the pirate Captain Henry Morgan was Welsh as well. Just to further confuse the matter, they both lived in the 1640 time range.
(Interesting side note: Did you know that it is a law still on the books that if a Welshman is caught in Chester after 10 PM, it is legal to shoot him with a bow and arrow?)
So...let's keep it straight: Captain Henry Morgan was privateering in the Caribbean at about the same time that Captain Thomas Morgan was getting his cannons busted in Chester as a Cavalier, a royalist.
Another name popped up: Lord Byron was a Cavalier.
What???
We're talking two different centuries.
Turns out that Lord Byron the Cavalier was Sir John Byron.
Lord George Byron was the poet, born in 1788.
Moral of the story?
English history needs to use more first names. 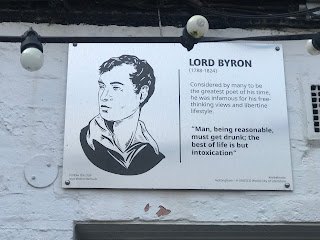 Without further reading, I would have simply assumed that Lord Byron was drinking
Captain Morgan rum... 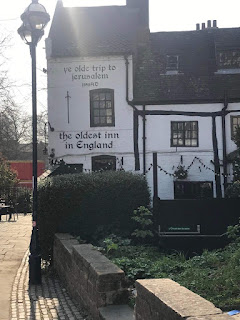 ...at Ye Olde Trip to Jerusalem...
and that cannon would still be a point of confusion.
Posted by Debby at 12:00 AM