This whole Christmas story started at the beginning of July to be exact. We had been nosing around an antique store and Tim saw this: 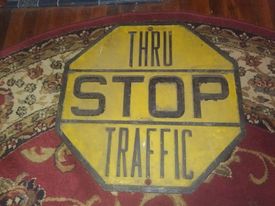 It is cast iron, heavy as...well...a chunk of cast iron, and he stared at that for a long time.
I said, "Well, if you want it, why don't you just get it?"
I could see him waffling about it, but in the end, he decided against it.
But he came home and googled it and discovered that it was from the 1920s and they sold for as high as $1600 on line, which was a shock.
(I don't understand it either, but I've got a nickel plated grill for a Model T commercial truck in one of the guest rooms and I don't know why, other than 'isn't it pretty?')
~answer: 'not to me, really, but to each his own'~
Anyways, he cogitated on that sign for a couple days, saying, "I should have just gone ahead and bought it...." but would always wind up with why it wasn't sensible.
(Side note: there was no discussion about this while he was looking at a nickel plated grill for a Model T, but men's minds are a strange and twisty thing, sometimes)
Anyhow, I pulled my sister aside and told her I was going to buy it for Tim's Christmas.
It was very carefully planned out. I borrowed the money from her and paid it back over the course of a month, sneaking it out in dribs and drabs. If Tim had noticed a $250 withdrawal from our account, he'd have put 2 and 2 together and guessed what I was up to. I messaged the dealer, and told him that I was coming for it and not to sell it. I told Tim I had to work overtime when I didn't, and my sister and I drove to Corry to pick it up. We dropped it off at her house where it was hidden away, and despite a major road detour, I managed to get myself home at the right time. Tim suspected nothing.
Which is why he announced the very next day that he'd decided to head back to Corry and get that stop sign. I was horrified. I messaged the man once again and said, "Listen here, when he shows up, you lie to him just like I've lied to him multiple times this week!"   When Tim walked up to him and told him what he was there for, I stood in the background giving the man major stink eye. But the shop keeper was obviously a puller of legs too. He said, "Oh, that's gone. Not too long after you looked at it, a guy came along and bought it." Tim was very disappointed, so he bought a weather vane to make himself feel better. Then the helpful shopkeeper said, "I got some more traffic signs if you want to look at them..." and Tim did and found another one he liked though not nearly as much, and...then, 'say, what's that over in the corner, there...which led to another story, and another addition to the pile up front.
At that point, I gave up and bought myself a clock to make myself feel better.
Anyways...
I sent Tim out to bring in something from the trunk of my car Christmas morning. My trunk popped open and he stood there for quite a while.
From the look on his face, I had managed to pull off an actual surprise,
It does not often happen, but oh, how I love it when it does!
Posted by Debby at 5:30 PM