It's been a long stretch of days that just seem to run together. I'm not sure why I have the blahs, but I do.

Cara called today, all full of excitement about the house hunting. That was a bright spot.

I tried a new recipe today, and that was fun too. (Although I should have tasted it before arbitrarily doubling the amount of spice.) It was some hot stuff, that's for sure. I guess you could call that excitement too.

Tonight, Tim needed to run to Lowe's to pick up some electrical stuff. He asked did I want to come along, but I didn't. I wanted to go stand on the bridge for a while.

Tim saw a beaver come swimming out a few days back. A couple days later, we were coming back from the playground with two little boys about 7:15PM and much to their delight, we once again saw the beaver swim out from beneath the bridge. Tim observed that the two sightings were at about exactly the same time.

Tonight, I wanted to go back and see if he showed up again.

Tim did his running around and then walked over to the bridge too.

Once again, the beaver showed up. We missed him swimming out from under the bridge. The water was darker than usual, probably because the skies were so overcast.  I happened to scan the river and there he was, swimming to the same little spot where he stops to have a bit of supper.

We watched him for a while. As we watched the beaver, across the bridge, the bald eagle sat in his favorite sycamore tree watching us.

I think it is funny to know that this beaver and this eagle are creatures of habit too.  I wonder if they ever get restless and bored like me. ("You know what? I'm going to hang out in a maple tree today, just to mix it up a bit" or "I shall dine at the small island upstream this evening.")

Tim and I walked back home to the sound of far off thunder. We were hoping for rain but we've just had a bit of drizzle, nothing measurable. We need the precipitation badly. It has been a very dry spring. The thunder storm is the first one of the year, and it was a pleasant thing to sit in the house watching the sky go darker and more ominous, listening to the thunder rumbling.

The rain still hasn't come but the thunder rumbles on, and in the dark house, I watch hopefully for lightning. 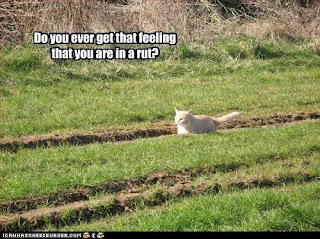