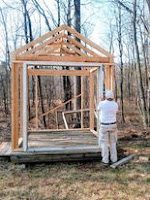 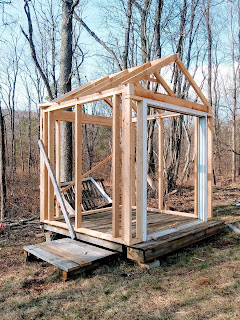 Tim called as I was getting ready to leave for the food pantry. He wanted to know if I was free to work on the greenhouse with him. There was nothing going on at work, and he didn't feel like just scrounging around for things to keep him busy for the rest of the day, when he had plenty to keep him busy at home.

We spent the afternoon at the retirement property. We cut and put up the roof rafters on the greenhouse. It was 77 degrees (25 celcius)  here today, and it was so wonderful. We put in four hours on those rafters. Nothing left but the purlins, which we will put on Saturday. Then we will put on the polycarbonate roof panels.

Ignore the platform on the side. That was a last minute design change. That needs to be pulled and put on the front of the building where the sliding doors will go in that installed frame. In the back of the building, we have a very large and heavy piece of tempered glass to install in the frame for it, which is leaned up against that tree in the back. There will be a small window above that which can open and allow for ventilation to control heat and moisture. On the sides, there will be some repurposed storm windows.

We should be done this weekend and we are both pretty excited about it. (Yes Northsider, we'll take pictures!)

Almost all the materials have been repurposed from previous renovations on at least 3 different houses. The floor is a deck left behind by the previous property owner. We pulled it into place and leveled it.  The roof was a lucky bit of serendipity. Tim was at a yard sale and found a stack of five panels, brand new, still in their protective sheeting marked $20 for all of it.

Tim did splurge and buy a vertical window for opposite the sliding doors. Both the windows and the doors have screens for cross ventilation and temperature control if necessary. That window was $49. Add to that the nails, screws, the breathable medical tape to close off the greenhouse panels, and probably some other incidentals that I have forgotten, we're looking at a total expenditure of no more than $150 for an 8 x 8 greenhouse.

And that's how we do it at my house.