The day started early. It was mentored youth fishing. William came and spent the night so that he could get up and go fishing with Grandpa. I made pancakes for their breakfast while William cooked the eggs. Then they were off. It was a successful day. William caught 3 rainbow trout and was very excited. The quote of the day: "Fishing is a lot more fun when you catch fish." (William)

After he went back home, we drove down to work on the greenhouse today. Tim called down the measurements and I cut the purlins and handed them up. We installed the plate glass window at the back and the sliding doors on the front. One we were sure the building wasn't going anywhere, we put the roof on.

The clouds started moving in, and the wind began to pick up a little, which made the roofing panels a bit trickier. I was handing a panel (4 x 5) up to Tim when a gust of wind caught it like a kite. I hung on tight and followed it a few feet across the yard. 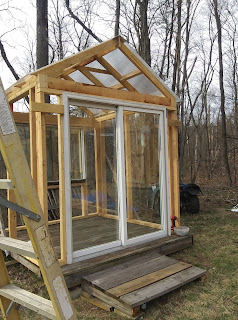 Taking shape.
I'll be hitting the road here in a couple days, so we got the heaviest part of the job done because Tim is excited to finish it up next week. One change that we are considering is to buy another polycarbonate panel for the north and south sides. We are worried about the storm windows and and grandchildren. We don't need any gruesome injury.
We had to take a run into nearby Titusville to pick up some screws. I was trying to do damage control on an inadvertent offense. (Once again, I'm really sorry, YP, it was truly not intentional.)
We were passing a gas station and the smell of gas fumes was very strong.
Tim said, "Jees. They must have had a spill."
I looked up from my apology. "Smells like it."
About the same moment we noticed police flashing lights up ahead. "I wonder if there has been an accident? Maybe that's where the gas smell is coming from. You think they'd have the fire department."
Turned out it was not an accident at all.
"Hmm." I said. "I can still smell gas." And Tim said, "So can I."
We drove along, and I said, "Gees. You don't suppose that's us, do you?"
Tim said, "I don't think so."
Long story short: it was.
The good news is that it is the line and not the gas tank itself.
Bad news? Tim's got another thing added to his to-do list.
Posted by Debby at 12:00 AM