To Sleep or Not to Sleep

William was pretty excited to get picked up today, because he's headed to Erie. His mother is picking up her new eyeglasses, but also Spirit Halloween has opened for the season. William has always been a big fan of Halloween decorations and will happily spend hours walking up and down the aisles of Lowe's looking at all the animatronics and Halloween decorations. These Spirit stores are open just for two months. They go into an empty store in September and pull everything out by November 2nd. The one in Erie is a superstore. I imagine that William will never want to leave. 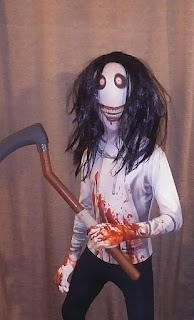 It is where he got last year's Halloween costume.
If I were his parents, he'd be wearing the same costome this year,
but I'm not so I will keep my big mouth shut.
Anyhoo.
It's also National Cinema Day.
Participating theaters are offering $3 movie tickets, and so they are going to take advantage of that while they are in Erie. William is just about beside himself. They are going to see Jaws in 3D.

I imagine he won't sleep for a week.
Grandma and Grandpa are on our own, and we're not going to let the weekend go to waste. We're headed to see the Titusville Iron Works. The historical displays will be nice and Tim wants to hear the live music and have a beer.
Maybe there will be a wine cooler for a lightweight such as myself.
Once I get that down, I imagine that I'll sleep for a week.
Posted by Debby at 3:05 PM