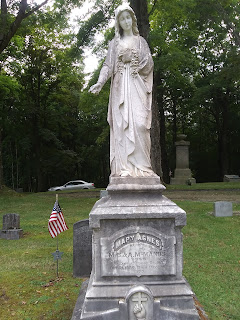 We were headed out for supper but had a bit of difficulty finding something open. We wound up on a street we had never been on before and stumbled on a very well maintained cemetery.
It was not especially old. Titusville came into prominence August 27th, 1859 when Col. Drake struck oil here, the world's first oil well. With the oil came many a "boom town". Titusville was one of them that managed to survive. There were many very wealthy residents.
The cemetery was donated to Titusville by Joseph Seep, a German immigrant who made his money by purchasing Standard's output and presumably getting it to market to resell. 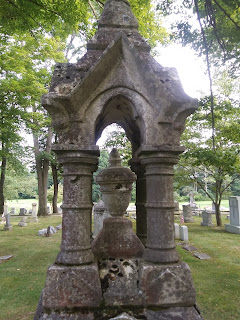 So while the cemetery was not especially old, the names on the family plots were historically notable so that you could google as you walked among the stones. 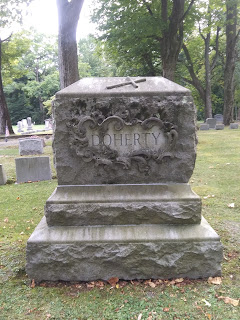 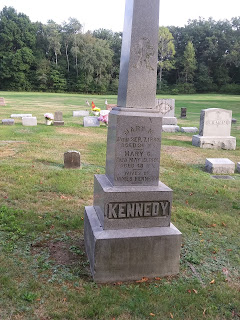 Tim was howling at this one. The fellow had two wives named Mary. There was also one named Bridgette on the other side of the stone. He wasn't buried there. We tried to find him but could not. We think he was probably buried with his final wife somewhere.
It was a nice walk under old trees. Far off thunder rumbled.
We never did get to our planned destination, but neither of us minded.
Earlier in the afternoon, I was leaving the house when one of my strays showed up. I stopped to feed 'Hairy'. While I was doing that, 'Car Cat' came strolling up, so I set out a dish for him too. He still will not be petted. I closed the door and walked past the cats only to see yet another cat, an orange and white tabby, wretchedly thin and acting very unwell. I set out another bowl for the poor thing. He hid under the dump truck as I set his bowl down, but he was eating ravenously before I was backed out of the driveway.
Posted by Debby at 4:17 AM