I was making biscuits again here. There was some discussion about biscuits the last time that I mentioned them. These are biscuits on my side of the pond. You can split them and serve them with chicken gravy or sausage gravy over them. Or you can drizzle syrup on them for the mornings. You can make egg sandwiches out of them. Our favorite way is to have them fresh from the oven with a good butter mix. If you use this recipe (which is my favorite), note that he doesn't mention the oven temp which is 425 F for 12-15 minutes. Note also that you can whip a batch of these up, and then freeze them, baking them two at a time or something. There is something very nice about a piping hot biscuit with dinner.
I like to make a flavored butter for them.
Honey butter, which is a healthy jolt of honey, a drip of vanilla, and probably a half cup of room temperature butter. You can add more honey to taste if you want. Blend it together. I use my immersion blender with the whisk attachment. Once it is blended, I put it in the refrigerator until I'm ready to use it.
Another butter we like is cinnamon butter. which is about half a cup of butter. a quarter cup of confectioner sugar and one teaspoon of sugar blended together.
The butter is best spread on biscuits or bread as it comes right out of the oven.
Anyways, I wanted to explain the biscuit part to you.
So I was making biscuits yesterday to go with supper. We had company coming over. Tim walked in and said, 'your friends are out here...' I know what he's talking about, and he's pretty unhappy. Mangey comes back every couple weeks, and to be honest, he seems to come back for the human interaction as much as the food. I got the good stuff from the top of the fridge and went outside. I did not have time to stop and play with him. He stood watching me sadly through the kitchen glass for some time. It was only when another stray came slinking over to check out the food dish situation, that Mangey decided to eat.
(Don't worry. I made it up to him this morning. I also went back out and gave the second cat some dinner too.)
There are three strays showing up here regularly now. One of them irritates Tim because he looks for a rolled down car window and hops inside to make himself comfortable for a little snooze. 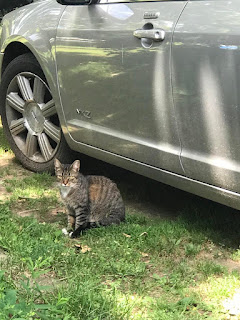 He is not hurting anything, and really, it's easy enough for Tim to keep his windows up. Then I wouldn't have to listen to him howling when it starts to rain and he hasn't noticed it until his car has gotten a good soaking. I tell Tim the same thing that I tell William: 'Every problem has a solution.'
(Of course, I have no room to talk. I had washed the cotton bathrugs and had them drying outside. When they are wet, they are so heavy that I worry about damage to the dryer belt. They had been out all day, and were just about dry when the skies opened up. Tim was upset about his car. I was upset about once again soaking wet rugs. We're a pair.)
But back to the cats, when we get the house built, we'll probably move those three cats right along with us, if they are amenable to the idea. Mousers would be useful to have, and Tim is agreeable to that. He likes a working animal. I'll probably move Mangey inside if he wants to come for the winter. Tim will NOT be agreeable to that. I'll probably see if the tabby (car cat) wants to join us. The long haired black one we tried to bring in a few winters back. It was not successful. He wanted to be an outside cat.
The property is being surveyed down the street. It will be good to have that officially mapped out and fenced in. I will never understand what started the whole thing, but people are mad! Even neighbors across the street who have no skin the game, so to speak. Before it is all said and done, we will have spent $3000+ to end the hostilities. We also chose not to renew a lease over it, which was the first time we've ever had to do that.
William is back at school. I'll be walking across the bridge to meet him tonight. We'll be going to the camp to pick tomatoes, among other things. It will be fun to hear what he thinks of school.
So there is your update.
Anyways, the biscuits got done, and supper was nice, a pleasant visit with an old friend.