Hairy is a large long haired black cat, one of the four strays (For everyone keeping track, there is Mangey, Hairy, Car Cat ~who is always looking for an open car window~, and Ginger.)  Hairy looks a lot like a four legged yeti, to be honest.

Hairy used to live with us. It lasted about two months. He was not an indoor cat. He did not want to be an indoor cat. He wasn't destructive or anything. It's just that he scooted out the door every time he had a chance, and then he just stayed gone, to teach us a lesson, I suppose. After several bolts for freedom, he finally just stopped coming back.

It's a free country, even for cats, I guess.

Anyways, now Hairy is back. He's the most regular feral. He is waiting for me when I wake up and look out the kitchen window. I get a clean bowl for him, put some kibble in it, and set it out. He eats it, although he makes it clear that he wants the good stuff. He gets the good stuff in the evening. That's it. He's fed regularly (usually twice with a small bowl of kibble, once with the good stuff). He doesn't need to be a pig about it.

Anyways, Ginger came in last night and I took his food out for him, Ginger gets the good stuff whenever he shows up because he does not stop by regularly.  This meant that I had to keep Hairy distracted so that he didn't rush in to gobble up his second serving of the good stuff. It's pretty easy to do, really because Hairy does love to be petted and talked to.

When Ginger finished, I scooped up his bowl and took it in the house to wash
and left Hairy sitting at the door with an outraged look on his furry face. He couldn't quite figure out what had happened, but he suspected that he'd been deprived.

I finished up in the kitchen, set the bowl back out in the mudroom and came back in the livingroom. Suddenly there was a rattling at the storm door which was slightly ajar. "What the hell?" Tim said, and he got up to see what was happening. There was Hairy, sitting on the side porch on his hinder, both paws on the door, drumming them just as hard and fast as he could.

"KNOCK IT OFF!" Tim roared, pulling the door tightly shut so that the rattling wouldn't be so bad.

Hairy did knock it off as directed, but of course this has become one more thing to make Tim unhappy about the current situation. 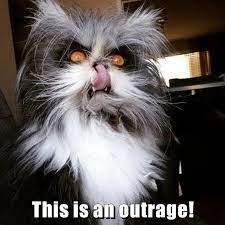 Disclaimer. This is not Hairy. Probably his brother or something.
Posted by Debby at 3:46 PM