Remember the elephant, shown in my last batch of pictures from the Tower of London? It used to be a custom of kings to have a royal menagerie as far back as the 1200s. So there was at least one elephant kept there. Because these animals were 'exotic', they often did not live long due to the ignorance of the people who were caring for them. The elephant, for instance, lived only two years before dying. Later reading explained that his keepers thought he was a carnivore and were offering him only meat. 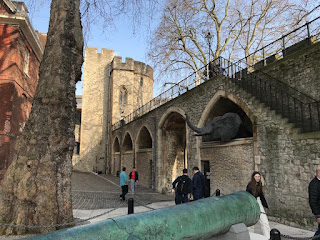 The lions were rather an exception to the rule, breeding well in captivity.
There was a tragedy when two tigers were accidently released into a cage with a lion.
They killed the lion. 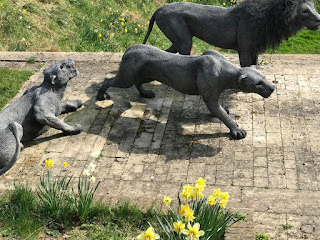 There was a polar bear, a gift from the king of Norway, who lived on the outer wall of the fortress and fished in the Thames. There was a sculpture of him as well, and I thought that I had taken a picture of it. If I did, I cannot find it.
There were also baboons. They roamed freely and sometimes attacked people, even killing them sometimes.
A later elephant attacked a guard and was killed by cannonfire.
The public was admitted to view the menagerie for a fee, but if they came with a cat or dog, they were given free entrance, and the animal fed to the carnivores.
Now there are only the ravens.
Thank heavens. 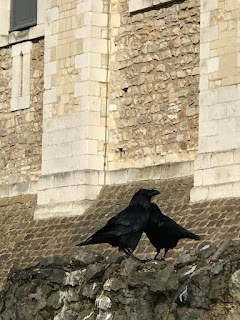 Legend has it that if the ravens ever leave the Tower of London, Britain and the monarchy will fall, so one of the Yeoman Warders is appointed 'Raven Master', and tends to the birds. The flight feathers on    one wing are clipped to prevent them from flying away, but they are well tended birds who did not complain within my earshot.
(Funny note: Some of the ravens do talk and in 2003, Vladimir Putin was said to have been very uneasy when one of them wished him 'good morning!')
This is the building that houses the crown jewels. Photography is not permitted inside, so you will have to content yourself with a photo of the outside. We bought the book, but you can view a partial collection here. One of the duties of the yeoman warders is to guard these jewels. 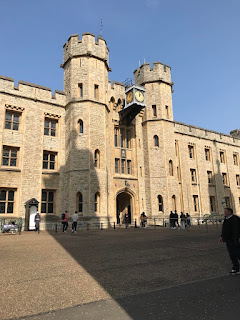 As befitting a castle, there are knights. There was a little suit of armor made for a prince. That made me sad to see, actually. Such a tiny little thing, and it must have been horribly uncomfortable for a toddler. I found myself hoping that it had never actually been worn. 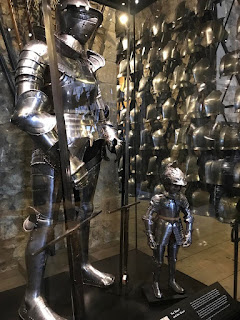 There was armor for the horses. 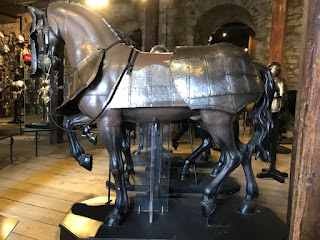 Probably had to fight dragons. (I joke, I joke) 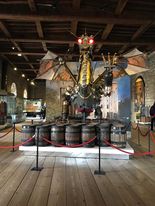 This lance was about 16 feet long, if memory serves me. I always wondered how a knight managed to hold on to one of these, let alone knock someone off their horse with it.
I found the answer. They're hollow. 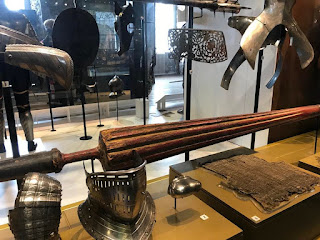 There were cannons all over the place as well. This was an especially ornate one. 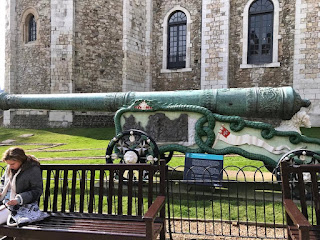 Also inside the 'white tower' as the castle proper is known,
you viewed the bedchamber of King Richard I 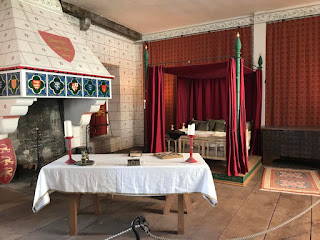 and the chapel just off his bedroom. 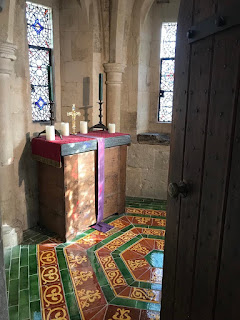 For every story that I can tell you, there are scores more that I don't know.
Two that I do know:
Two little boys, heirs to a kingdom, were taken by their uncle to the Tower of London where they were never seen alive again. In the room where they were held, they have piped in very soft whispering, almost inaudible. Walking into the rude and empty stone room and hearing that whispering gave me the shivers. Although it is assumed that they were murdered, there is no direct evidence to prove this, but we do know their uncle ascended the throne as King Richard III.
Sir Walter Raleigh was also imprisoned there for years before he was finally executed. His head was presented to his wife in a velvet bag and she kept it at her side for all her days. After her death it went to a cupboard under the stairs at his son's home. It was finally buried with the bodies of three of his grandchildren who died in an epidemic.
Standing there in the middle of hundreds of years of history and mystery, where a chapel stood watch over the site where hundreds were brutally murdered by rulers who prayed devoutly in little antechambers off their grand bedrooms, where ravens stand watch to preserve that monarchy and guards stand watch over its treasures, I have to admit to awed goosebumps.
Posted by Debby at 6:31 PM