We took most of the day off from the renovation. We made great progress yesterday and decided that we really needed to get up to the retirement property. We have not yet gotten the garden tilled. The grass has yet to be mowed. We had a pile of scrap wood that needed to be burned up. I had my tomatoes and peppers (thanks to Brittani) to get in and a bunch of other planting to get done.
I was looking very forward to being outside.  I needed a day in the garden.

Getting out of the truck and heading to the garden, I was startled to see this little thing, curled up beside an ornamental shrub. 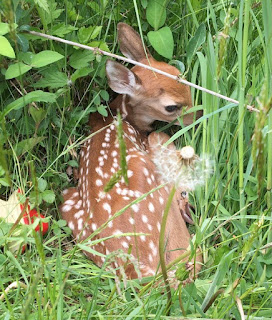 "Oh, Tim!" I whispered. We both stood watching him. He was wide eyed with terror, but he did not move a muscle. It made me think of terrified children, and I felt sick all over again.
We backed away, leaving him alone.
For all his irritation about Mangey, I must say, Tim was completely taken with this guy. He drove the tractor behind the camp, so as not to frighten the little fawn hidden in front of the camp. That knee high grass? Tim decided not to cut it, because he was afraid there might be more fawns hidden in it. We drove the tractor down over to my sister and brother in laws to get the 'community' tiller. We got a deal when we bought a brush hog some years back, and got the tiller as well. We leave it across the road in their equipment shed. Who ever needs a tiller can just bring their tractor over and hook it up, and then put it back when they are done. It's worked out well for everyone for the past 3 or 4 years.
My sister was home, and we were glad. We needed an extra set of hands to hook up.
Anyways, we got the garden tilled. It tickled me to see a pair of bluebirds sitting on the fence waiting for their chance to grab a juicy worm as the tiller went by.
We spent a couple hours on the garden, and decided to let it sit for a couple days and then come back and till one more time before planting on Sunday afternoon. I unloaded my plants into the green house and gave them a good watering.
The little fawn was still where his mama left him.
We ate lunch and then went back out to unload the truck. Tim said, "We're not burning the wood. I don't want to scare him." We unloaded it into a neat pile ready to be burned the next time we don't have a fawn in the yard.

We did not get nearly as much done as we had intended, but we didn't feel badly about it.

When we got home, I saw Mangey. I was glad to see him and called to him, setting out a bowl of food as usual. He took one look at me and tore out of the yard like his tail was on fire. I went out later, and the food sat in the bowl, untouched. It's my fault. I rushed it. I should not have tried to touch him before he'd decided that he trusted me.