This is the Tower Bridge.
In the late 1800s, ship traffic up and down the Thames was very heavy. The population had grown to such an extent that a bridge was required in the area. A regular bridge could not be used, because it would impede the tall ships traveling up and down the river. Designers were encouraged to submit their plans for a bridge that would allow for the ship traffic but also allow for uninterrupted foot traffic back and forth. After 8 years, a design was finally picked that suited everyone. The tower in the foreground was a house for the Bridge Master and his family. There was also a kitchen there to feed the men who worked in the lower levels of the bridge, operating the massive coal fired steam engines that that raised the bascules of drawbridge, an operation that took five minutes. 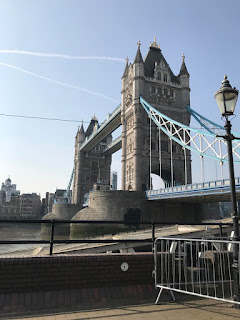 A glimpse of some of that machinery. It was kept spic and span by the team of men who worked there under the direction of the Bridge Master. When they weren't raising and lowering the bridge and keeping the coal ovens stoked, they were polishing and cleaning. 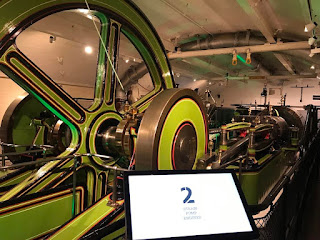 This is a glimpse of the approach on the bottom level.
When the drawbridge is raised, people have the option of walking up the stairs in both the towers... 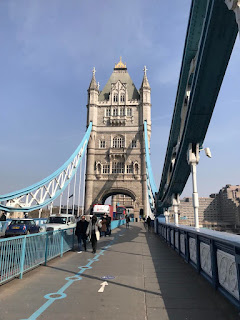 ...to access the sky bridge, which now has transparent panels to walk across and look at the traffic below. 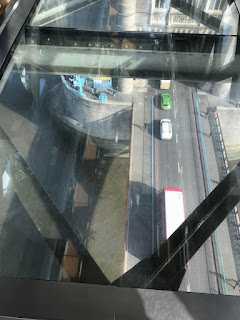 It also gave an amazing view of the city. 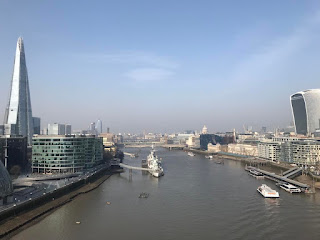 The bridge took 8 years to build by a team of 432 men. The two piers that the 60 foot tall towers are built on contain 70,000 cubic yards of cement and go 21 feet into the river bed of the Thames.  In the eight years of construction, 10 men died, which was amazing considering they were climbing all over the high girders with no safety gear.
The construction of it was an amazing feat for its time.
I bought a book, but if you wish to learn more about it, here's a link.
Sorry so short. There are probably a million errors in this which I'll discover after I hit publish but we are quite busy here. We're knocking out some big projects at the renovation because next week I'm headed east to behold my darling grand-daughter and my son and pregnant daughter in law. It will be the first time that I've seen them since January.
Accomplishing some of the big projects before I go provides Tim with plenty of small work to keep him occupied while I'm occupied somewhere else. We look to be finished by the end of May.
Tim said, "When we are done with this, we're taking some time off."
I said, "We've still got the garden..."
He laughed, but he didn't sound like he thought it was funny.
We both agree, however. With this inflation, a garden is mandatory.
Posted by Debby at 9:49 PM