What a strange picture.
But if you notice the sign to the left, it says 'Pudding Lane'. 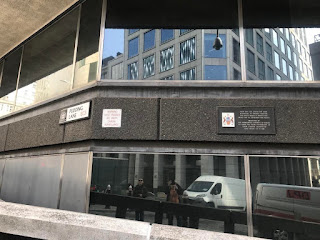 Pudding Lane was the site of Thomas Farynor's bakery where the Great Fire of London supposedly began September 2nd, 1666, burning until September 4th and totally destroying most of 'old' London. There were rumors that 'foreigners' had started the fire, which resulted in street violence against this population. If you care to read more about it, here's a link: 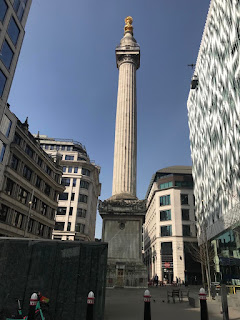 This is the memorial to the disaster.
Interesting to me, though is just how many 'great fires' London has survived through the ages.
This is another short post. We are still hard at work.
Thank you 'Anonymous/Paranormal John'. After reading some links in your comments, I bought the book 'The Lives They Left Behind'. Heartbreaking and engrossing. While I am not familiar with Willard, I have worked with former residents of Willowbrook, It really is heartbreaking to consider how few options these people had.
Posted by Debby at 6:30 PM