Yesterday, we came home from camp early. We had a drive-thru birthday party to go to. The recipient was 80 years old. We were supposed to drive through the parking lot of the nursing home in a big lazy loop shouting our congratulations to her from the car. Her great-grandson importantly held up a basket for us to drop her birthdays cards into.

In between where we were coming from and where we were going to, we came upon a very bad accident. EMS had not yet arrived. The car was partially under the truck that hit it. Tim said, "I sure hope there wasn't a passenger in that car. I doubt they could have survived that."

Sobered, we continued on our way to celebrate Lenora.

Later that night, I texted my sister to see if accident had been cleared by the time that they headed back home. Her response came back, "No." It turned out that they were friends of theirs, a brother and a sister. Neither had survived. When I told Tim, there was a sharp intake of breath. The woman had been a long ago coworker. Many years ago, they had been good friends.

Checking my messages, I was startled to see that just a few weeks after celebrating their 75th wedding anniversary, Agnes has passed away this weekend. I was so grateful that we had been able to see the two of them together one last time as we celebrated their special day. 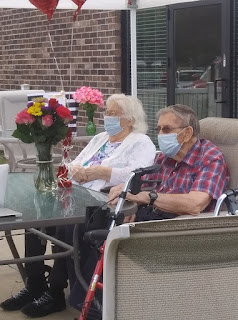 This morning , I was shocked to see that a coworker's son had been killed in a motorcycle accident.

We drove back to Grand Valley tonight. We had taxes to pay on the last property, and I wanted to water my raspberries. I'd also left a half dozen heirloom tomatoes that I'd meant to bring home. I wanted to save the seeds for next year. Tim wanted to drive his old truck home. Someone he works with is interested in it.

I followed his old blue truck home and in my quiet car I pondered things. On the passenger seat are my tomatoes, the end of this year's garden, and the beginning of next year's garden. and I don't really have anything profound to say, just an observation that life is a crazy mix of beginnings and endings, celebration and heartbreak, congratulations and condolences.