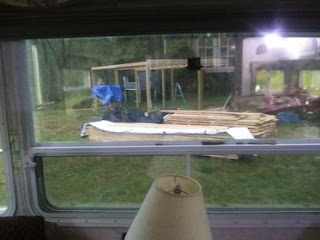 This is the beginning of a garage. Well. Actually it is an equipment shed, a place to put the tractors. It will have a second floor for storage of tools and things that go with the tractor. You'll notice that it is pretty large for two tractors. Fortunately Tim found a bulldozer he wants pretty badly. There's no point in having a half empty equipment shed, I guess. Tim's pretty practical about things like that.
We've been hauling rough cut hemlock for 3 days. Finally, Saturday, we were able to start building. We intended to make good use of this long weekend.
We did not get the three days we'd been hoping for.
This morning we woke up and it was raining. The wind was gusty and the thunder thundered and the lightning flashed. After checking the weather multiple times, we gave up. It wasn't going to clear off. So we ate lunch and then headed back home. I had some tomatoes to do, and some peppers to chop. Tim wanted to make sure the furnace was ready to go at the latest rental. It is supposed to get cold here next week.

I left first, in my car. As I got closer to home, I could see once again, that we'd had some pretty serious storm damage. Trees down all over the place. My normal route was blocked, and I could see a huge tree down across the road, within sight where the man was killed by another falling tree last week. Next door there was another tree down. Blessedly it had fallen neatly between a garage and a house. A friend had a huge tree come down from a bank. It missed her home by four feet. Once again, power was out in many places, and people were being told that it could be 24 hours before power could be restored to everyone.

We were lucky. Our trees were fine. One half hour away, we were not even aware that we were getting a repeat of last weeks violent storm.