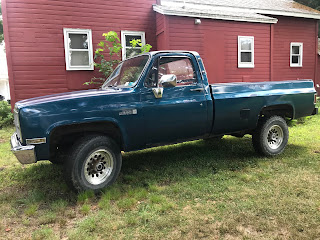 Tim has a terrible habit of accumulating things with motors. A few years back he bought a 1982 squarebody GMC truck, and he loved that truck until ~squirrel!~ he found a 1982 Chevy squarebody truck that he liked even better. 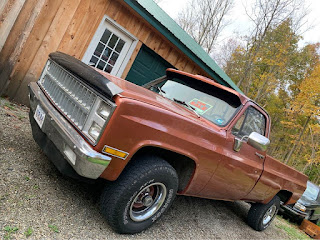 He's been talking about selling the other truck for some time now, but what I noticed is that while he talked about it, he didn't. Like I said, it was just a little thing that I noticed.

Well, today, he came in and announed that he needed me to take pictures of his truck and put it on marketplace for him.

And, I am not kidding...I published that advertisement, and within minutes my smart phone chat app was pinging like an old fashioned pinball machine. I began private messaging our phone number and the phone began ringing off the receiver. (Yes. We are dinosaurs. We have a land line.)

After providing our phone number about 30 times, I began to get nervous. I began to message people that it was very likely sold, but that we'd get back to them tomorrow afternoon and let them know for sure. While I was responding to one message right after another, Tim walked in with a wild eyed look. "Message this guy with our address," he said. The phone rang again, and he left the room with the phone to answer more questions.

So I messaged the guy with our address and let him know that we were fielding a lot of calls and to call before he came so that he didn't waste a trip. "I'm on my way," came the immediate response. "It's a 45 minute drive and I've got the cash in my hand."

Tim walked back in the office. "Mark the truck as pending," he said,

I stared at him. "We can't do that!" and he wanted to know why. I said, "We've got a fellow half way into a 45 minute drive. We can't just sell it out from under him." Tim said, "Well. I promised it to someone else." And he got that stubborn look.

"You told me to send this man our address, and you did that about 20 minutes ago. He gets first crack because he's driving here right now."

He decided there was no sense in bickering about it until we saw whether the kid actually showed up and whether or not he actually wanted it.

Long story short, the kid got here and he took the truck. All that was left was to call the other guy who thought he was buying it at 11 am tomorrow.

In case you did not know this little factoid, men take potential purchases of 1982 trucks very seriously indeed. He was pretty upset.

By the way, the truck was sold within one hour and 15 minutes of placing the ad.