Actual conversation from a marriage:

"I'm going to walk to the Goodwill. The walk will be good exercise. It will also guarantee that I won't buy anything that I cannot carry. I won't spend more than $20."

5 minutes after hitting Goodwill, I called Tim. "Hey. I'm going to need you to pick me up. Drive the truck." 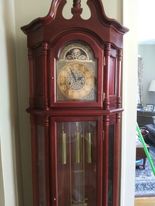 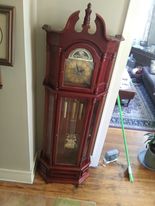 Price $24.99.
I stood in front of it, trying to talk myself out of it. A woman stopped and studied it as well. She opened the glass doors.
I took a deep breath and said to myself, "Self, this is not a tractor, for pete's sake. Get in line."
There was a pretty long line, and I waited for some time. I watched people stopping to examine that clock. As I waited, it struck me (see what I did there?) 'Were the hands moving?'  I asked an employee, "Does that clock work, do you know?" She said that she didn't know, that it came in about an hour before they closed the previous night. She also said, "There's been a lot of interest in it. We've had seven people asking about it today. Most of them needed to see if they could arrange transportation for it." I took a deep breath and left the line. The last darn thing that I needed to drag home was another clock that had to be fixed. I studied hands on the clock. They were moving.
At that point, an elderly man stopped. He stepped in front of me and began examining the clock. His wife was looking at clothing. He said, matter of factly, "We're getting this clock," to her. She told him that she wanted to look around a little more.
That did it for me. I went back to stand in line, which was even longer than it had been before. The elderly man continued to study the clock, hovering near it in a proprietory way, keeping an eye on his wife. Then he saw me in line. Quick as a wink, he darted to the counter and said, "I'm buying that clock," to the cashier.
My heart dropped.
Bless her heart! She scanned the line quickly and saw me standing there. "Did you decide to take the clock?" I swear I could have kissed her! but I said in a very calm voice, "Yes. I did. Thank you." She turned to the man and said, "I'm sorry. It's sold."
I continued to wait in line.
The phone rang and the manager came up to answer it for the busy cashiers. "The clock?" she said, and the cashier said, "She's waiting to buy it," gesturing at me. "I'm sorry," the manager said. "The clock is gone." She listened. "Yes," she said. "It did attract quite a bit of attention."
One of the employees came up with the dolly to help me load it. I removed the pendulum. He wondered if we should remove the weights. I explained that it was a reproduction, that the clock itself was keywound not weight driven, so the weights were decorative, not heavy like a real weight driven clock would be. A couple people stopped to listen. I told the employee that he could just wheel it to the sidewalk, that I'd just wait for my husband and the truck, but I no sooner got the words from my mouth, than our truck pulled up. Perfect timing.
Do you know that elderly man actually followed us out the door? He stood watching as we loaded it. I had the feeling he wanted to say something, but he did not.
Late Edit: I got it home and cleaned up and slid into the place it belonged. Much to my surprise, Tim said, "Let's go back to Goodwill and see what else is there." What kind of a woman turns THAT down? Not this one, that's for sure. I did find three smallish things. While I was waiting in line, Tim suddenly let out a loud laugh. "What's so funny?" I asked. He said, "The woman in front of us just told the cashier they'd returned to buy the grandfather clock."
Posted by Debby at 12:00 AM