Oops. He did it again.

On our great jaunt to the reservation last Friday, things happened that I did not tell you about, and the biggest thing was that as we drove home, suddenly my husband's head whipped around like it was on a swivel.

I get an icky feeling when he ogles like that. I'll never be able to break him of that habit. He's a man. I mean, really, it's not totally his fault, being that the object of his lust was just openly exposed in the front yard of a house for heaven's sake.

He did not listen, and pulled off the road to turn back.

He headed back and stopped in the driveway. There she was in all her naked glory. 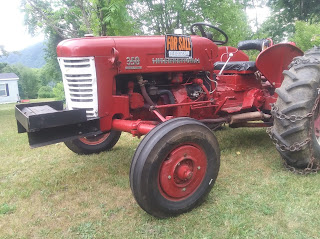 The old man came out of his house, and the talking commenced. It went on for a good long time. So long that I finally got out of the car to listen. I could tell that Tim was quite serious about this old girl. She is a 1956 International 350, with wheel weights and chains, plus that winch, that had him drooling. It has a 3 point hitch and if he can find a bucket for the front, it will do everything he ever wanted a tractor to do. 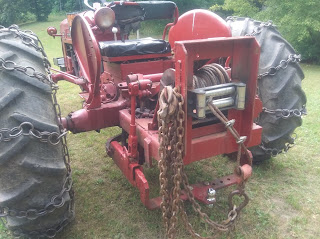 The old man still had a full head of thick black hair despite his lined and weathered brown face. It was impossible to tell how old he was for sure, but I had a feeling that he was quite a bit older than we would guess, since one side his face drooped, indicating that he'd had a stroke, but he was tall and rail thin, and he stood ramroad straight while he answered Tim's questions.
I took the two pictures that Tim wanted. I got the owner's name and phone numbers into my phone. "I'll call you Tractor Jeff," He gave me his wife's number and told me to call her Tractor Darlene. We said our goodbyes, and once again, we were on the road.
I knew that Tim wanted that tractor and I knew that he wanted it bad. He doesn't ever make snap decisions on things though. He came home and read about it for most of the rest of the night. He did price comparisons. He read what other owners had to say about theirs. Based on all of that, it was a good price for a very reliable old work horse.
I asked him how he would get it home. Our big truck is waiting on a new transfer case at the moment.
"I don't know," was the answer, but it didn't take long for him to figure out how he was going to do it. My nephew has a trailer we could borrow. My brother in law has a big truck to hook it up to. Since it is a wet week predicted, Dave will not be busy in the hayfield. He's also pretty interested in this 'new' toy.
So, we called Tractor Jeff back and asked to come take another look at the tractor. Tim had a couple questions. He also wanted ot hear it run and to drive it.
Tractor Jeff was pleased as punch to see us again. He'd had a lot of people stop, but he said that when they found out it was a 66 year old tractor, everyone lost interest. I laughed. People do not understand that these old tractors are built to run. They have no computers to them at all. Whatever goes wrong can be fixed. The parts are still made. Tim would pick an old tractor any day of the week. (Luckily, he would pick his old wife any day of the week as well).
Tim drove the tractor away. Tractor Jeff watched William walking back from the car. He'd gone to get  his water. He took a swallow of coffee and said, "I was wondering where you got off to." I said, "He was a bit worried about his pet bears. They're not chained up." Mirth bubbled up in Jeff's dark eyes, but he showed no hint of it on his face. He said, "Well, I've only got the two of them now," in a serious voice. I said, "They haven't eaten a kid in quite a while, have they?" Jeff got a musing look on his face. "Not since the one grandchild, but he always was the slowest one." We all laughed as Tim headed back on the tractor.
Tomorrow, we'll go back one last time to get it.
One the way home we stopped and had ice cream on a pirate ship . William had never been before, and it was a nice day to sit on top…

...and look out over the marina.

...although the heavy clouds made our view very different.