There you have it in all its glory...I present to you, a soup ladle, Jefferson pattern, rolled out in 1913 by Simeon L. and George H. Rogers. 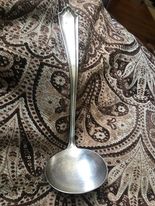 Not so much? Really? I guess there is the slightest chance that I'm a weirdo. I've heard that before, and I assure you, I will hear it again.

Quite honestly, though, I thought everyone did that...find some treasure that sends you off down a google rabbit hole where one thing leads to another, and then another...I guess I just am a curious person. If curiosity kills the cat, well, then thank heavens I'm not a cat. I'd certainly have used up all my nine lives.

Speaking of cats, I went to bed last night and just as I was dozing off, I heard a cat meow. I  jumped out of bed right away, because I have not seen Mr. M. in a couple of weeks and I am concerned for him. I padded down the hall, into the kitchen and out the back door. The motion detector light came on and I stood there in my nightgown, saying "here kitty, kitty, kitty...." in a low voice. 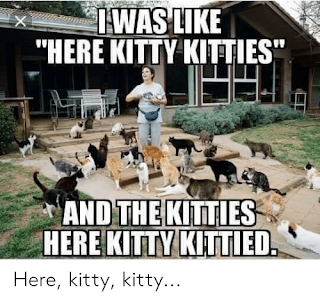 You know, feral cats keep their own schedules and answer to no one but themselves. The idea that he just moved on to the next patsy around the corner is far more comforting than pondering all the horrible things that could befall a wild cat.

I finally gave up and padded back inside.

It was then that I made the egregious mistake. I took my wide awake self to the computer for a few minutes (yeah, right..)

I googled around like I do and then there was a giant sucking sound... 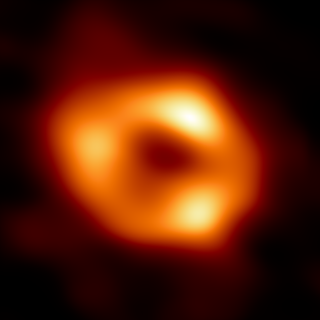 ...as I was sucked into the swirling black void of facebook.

I looked around at the 'Helping Hands' site, and noticed one ad asking for recommendations for a surveyer. There were a number of comments to it, and I glanced down through them. Someone asked her why she needed one in such a hurry. She said that her neighbor was claiming that the property line went right down the middle of her house and she was sick of it.

That would be alarming. What the hell kind of person would try to claim half your house?

I looked at her name, and quite slowly, it occurred to me. She lives next door to one of our properties. We were the unreasonable neighbors she was referring to. I read a few more of her comments and man, we are some real bastards.

So I replied to the most unreasonable comment. I said, "Ricki, this is simply not true. We have never claimed we own half your house. We were not aware there were any issues with the property line. It's plainly marked in the front yard and in the back. We've never even spoken to you about the boundaries, let alone tried to claim we owned half your house. If you've got a problem, the reasonable thing to do would be to talk to the people involved, not spread lies on facebook."

She shot back immediately, "Those pipes in the back yard that are spray painted are drain pipes, not markers!"

Who ever heard of drain pipes being pounded vertically into the ground?

I said, "They have been the boundary markers since we bought the house in 2008. Again, we've never exchanged one word with you about boundaries, let alone claimed we own half your house."

She shot back some sort of accusatory thing, but I saw that there was no point talking with her. Reasonable people don't tell whopper lies in a public forum.

I looked up the plot maps on line, and brought up her address and our address. I wrote the lot number down to look up at the court house, and I used the GIS mapping to lay out the lot boundaries and measurements.

My hackles were raised, by golly. 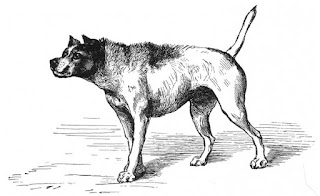 By the time that I finished my writing and studying it was 3:30 in the morning. I went back to see what else she had added, but she had removed her post, which was good, but really, I went to bed trying to figure out what exactly it was that got her shorts in a bunch. We rarely see her and we have probably had one actual conversation with her, like a couple years ago.

When the drill sergeant woke me up this morning, he showed no mercy. I got up and I got moving. Four hours of work in the garden settled me right down. When bedtime comes tonight, I'm pretty sure I'll be able to sleep.