My comments to Ellie yesterday were sincere. I have no wish to quarrel. Ed and I see things differently and we have e-mail discussions. My comments to him were sincere. I appreciate his patience and the fact that we can bounce our different perspectives off one another and at the end of it, he is still someone I regard highly. Kelly, ditto. Bob, ditto. 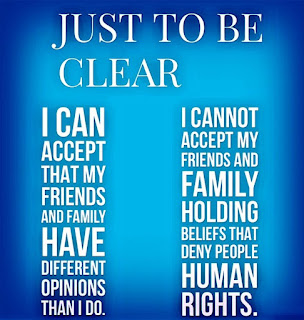 Let me be clear. I disagree with the recent Supreme Court decision re: Rowe Vs. Wade. I also do not believe any person should be treated differently due to their gender, color, race, beliefs. I believe that the second amendment needs some work and that it is a matter of common sense. Probably one hundred and one things that people might find controversial in their hearts are not controversial at all in mine.

I will live my life according to those truths.

However, I come from a conservative family. A lot of right wing evangelical Christians. Of my family I have one sister left. Just one. Due to the differences in our beliefs, the decision has been made that we simply don't discuss politics.

Do I know they think differently?

Do they know I think differently?

Am I going to change their hearts?

Are they going to change my heart?

So, I accept that they vote their consciences just as I vote my own conscience, and I try very hard to respect them for that alone. I don't look any farther than that.

So, while the post was placed by someone who I would agree with on many a topic, I disagreed with the sentiment of this post, I tried to verbalize that in a comment.

Advice: Don't do that. Ever.

People honestly seem to believe that family should be cut out for believing differently. I can tell you true, that's already happened with most of Tim's family. Even worse, I will be forever seen as the one who makes him think as he does. (Disclaimer: I'm not. He has his own strong opinions.)

Respect, however is a two way street.

So. Is it any fairer for that scenario to play out when I agree with the views?

However, you don't want to say something like that on social media. Take my word for it.

Rumi: 'Out beyond the ideas of right-doing and wrong-doing, there is a field. I will meet you there.