We ordered a gift on line for Tim's son.  It was a big thing and we tracked the package's progress, because we wanted someone to be home when it was delivered. Tim went hunting and I was resting my knee, so I was the obvious choice.

I was home all that day and nothing was delivered. When Tim got home from hunting, he was surprised to find that it hadn't been, so he got on line to see if they'd changed the date. It's a busy time of the year and it happens. Except that he came out of the office saying, "It was delivered at 1:22."

"Really? Did they set it out back maybe? I don't understand that. I was right here all day, unless they showed up while I was in the bathroom or something."

He looked out back. Nothing. I mean, it would have been impossible to miss. It was big.

I messaged FedEx and let them know it had not been delivered. I received no response.

I guess that I'm a bit of a wierdo, because my worry is always that they will think that WE are the dishonest people, that we are scamming them. After an hour with no reply from FedEx, I called Cabela's.

I had to wait forever to speak to a customer service rep, but 'tis the season. I waited. When the representative finally came on the line, I explained things.

I said, "It is not here and I was home all day waiting for it. I'm not sure what to tell you."

She said, "I'm looking at the picture. It's out on the patio behind a metal chair with a white cushion. The house is white, the foundation is gray and the patio pad is gray."

I said, "Well, that's a problem then. Our house is yellow and we haven't got a patio OR patio furniture."

Long pause. "Well, they must have delivered it to the wrong address. Does the house sound familiar?" I hated to tell her that we live across the street from a block of rental houses owned by the same man. They are ALL gray and white. I was pretty sure none of them had a patio though.

"It's a big box," she said helpfully. "And it was shipped right in the original packaging so it will be pretty obvious."

Tim was standing there in his flannel pj bottoms and t-shirt. I covered the receiver and said, "The last time that we had a package mis-delivered, it was the bull-float. It went to that house there", and pointed across the driveway to a neighbor off the main drag and up a side alley. He said, "Well, if he would have gotten it, he'd have run it right over."

He pulled on his muck boots anyways and stepped around the stockade fence to head over. I said to the woman, "Do you want to hold on, or do you want to help someone else and call me back?" She said she'd wait and so we talked about Christmas and packages and it wasn't long before Tim was stepping around the fence, wrestling with the box.

Later, I said, "That's kind of strange he didn't let us know it was there." Tim said, "He couldn't find a label. Neither could I. He didn't know where it belonged. He didn't even know who left it. He was very glad to see me."

I looked at the waist high box curiously, turning it this way and that, examining all four sides. How strange. There wasn't a label.

I found it later while I was trying to wrap it. The label was on the bottom of the box. 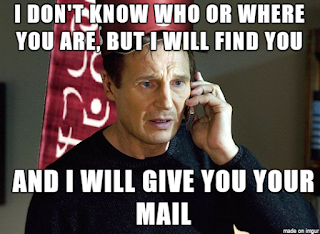