Steve  showed a picture of his Christmas cactus and commented that it should be called a Thanksgiving cactus, given the timing of its blooms. It made me laugh because: 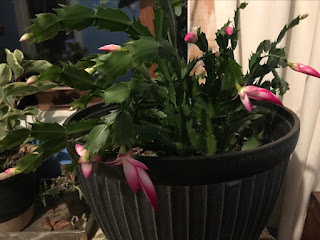 Mine is happily blooming as well.

The first year I had it, I thought "Kind of early for a Christmas cactus to bloom, innit?"

See those spikey protuberances, Steve? Like me, you actually do have a Thanksgiving cactus. I have to admit that I knew nothing at all about an Easter cactus.

My plant looks rather small for a 50 + year old cactus, doesn't it? It is because I nearly killed it two summers ago. I tried to nurse it back to health, but there was no saving it. I set it aside to be thrown out, meaning to save the pot. When I got around to it, I discovered beneath it, one lonely green bract. I barely dared to hope, but I brought the pot back in, leaving that tiny little plant right there in that huge pot. I didn't want to risk killing it by replanting it in a smaller pot and possibly disturbing the roots. It looked pretty goofy for a long time, that tiny little nubbin all by itself in a huge pot.

I am happy to say that the old cactus is thriving once again. I think it actually looks much nicer started over again without the woody thickness that all old cacti seem to get.

It's interesting reading all the exacting complicated instructions to make it bloom.  total darkness vs light, temperature, humidity. I've never done a thing with it. It's thrived for fifty years on being ignored. What killed it? I read about people taking theirs outside for the summer. I changed things up. I will never do that again. Some things are best left to bloom where they are planted.