Tim puts on his grumpy pants.

Remember how I'd gotten a new rug? It was one that I wanted, but it just didn't work in the room that I'd bought it for. 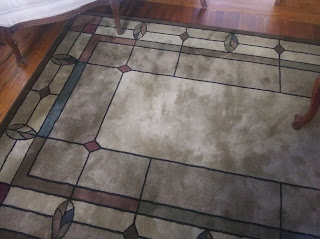 Then I got the bright idea to drag the rug out of the library, and put it in the living room, and put the new rug in the library.
There are disadvantages to having a wife who gets bright ideas. Tim will attest to that. 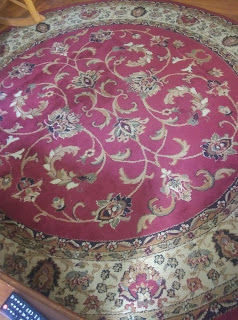 While I wasn't totally happy with it, it was better.
But then last night, I was on facebook market site because don't you know, sometimes people need stuff that I have, and it's nice to be able to offer things up.
Except 11 minutes after it was posted, I saw a rug. It was a Persian rug, according to the guy. He didn't like it. It was his mother's. He had inherited the house. There were several rugs like these. His sister took a couple. He sold one through an antiques dealer. This one was in an upstairs office that he didn't get around to going through until a couple years after he got the house. He had it cleaned, and rolled it up for a couple more years, but in the end simply decided that he did not want to use it. He was offering it free. I messaged him and said that I'd be glad to have that rug. 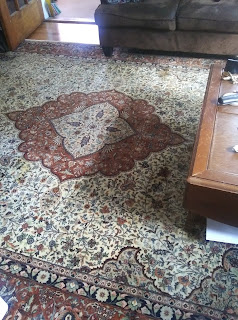 I don't know a great deal about Persian carpets, but from what I'm reading, there is a very good chance that this is the real deal. The guy getting rid of it claimed that it was. It is marked on the back in yellow, but I don't know what the writing means, and I haven't had time to really look into it because this is a huge rug. just over 9 feet wide by just over 13 feet long. What that meant is that not only did I have to move the rug that was in the living room, I had to move furniture in the living room.
You know how when you move a piece of furniture that has not been moved in a few years, and well...dust bunnies, cobwebs, strange debris. (Please tell me that I am not the only one this happens to.) I spent the day scrubbing and polishing in the livingroom and then Tim helped me roll out the newly acquired carpet. It looked nice. Very nice.
I looked at Tim cheerfully. "We can put the red rug back in the library."
He didn't look cheerful but he helped anyway, both of us pulling the brand new carpet out into the front hall and hauling the red circular rug back into the library where it has always been.
I looked at the rug that I'd just bought on clearance. "You know where we need to put that?" I asked.
I hadn't noticed that Tim was wearing his grumpy pants.  "Can we do that tomorrow?"
I said. "Aren't you anxious to see how it looks?"
From his expression I could tell that he was not at all anxious.
But he helped me measure, and then we moved the hall tree and once again, I was horrified at the back of it, the floor underneath, etc. Everything stopped while I did some serious scrubbing and then took a magic eraser to the wall behind the dracaena where the pot had left marks. I  scrubbed some more, and then Tim helped me put the rug down with as much grace as he could muster. We moved the polished hall tree back into its rightful place. The potted plant was replaced under the newly polished clock. 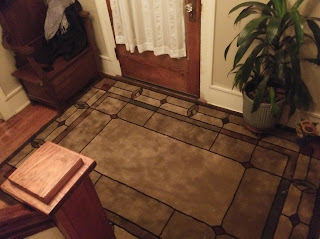