I am a hot shower kind of girl. I pulled back the shower curtain and stepped into the steamy bathroom and grabbed my towel. I heard a strange noise, turned to look at the clawfoot tub and was horrified to see a tiny tsunami of rushing water ~HOT water~ across the bathroom floor. In an instant, the rugs were saturated. I threw my towel on the floor and began grabbing towels from beneath the vanity and dropping them on the floor while shouting for Tim.

He had been on the verge of walking out the door to go someplace but he headed down the hall, a little impatient at the interruption only to be met by the water overflowing the sill and washing across the hardwood floors in the hall.

"Hand me a towel!" he shouted, and I threw him the last three bathtowels while still trying to sop up the water on the bathroom floor.  (Did I mention that it was hot? Because I feel like I might have not stressed that. This was hot water...) By then, my bathrobe and my flannel nightgown were both off the back of the door and on the floor being used, having run out of towels. 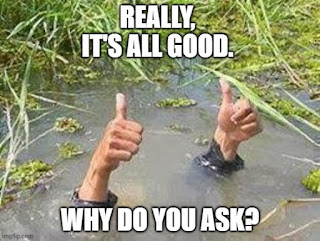 Tim rushed downstairs to the shutoff valve and turned the water off to the house. A pipe had burst.

He came upstairs and helped me pick up steamy, sopping towels, rugs and nightclothes from the floor and drop them into the bathtub.

Just the previous day, he had complained, "I don't know what you used when you mopped the bathroom floor, but it feels like it left a residue. I do not like it."

Naked as the day I was born, hair still dripping, I looked at him, and said, "Honey, I rinsed the residue off the bathroom floor for you."

We started the day with a bit of agenda. We had things to do. Instead, I  hauled heavy wet things to the washer. Tim did some plumbing.

Late Edit: I want to make really clear that this was not an actual tsunami. It was a lot of water, and it was everywhere, but it was immediately caught, the water shut off right away, and no one was standing underwater in our house, even for a second. Feeble attempt at a humorous portrayal of actual events.