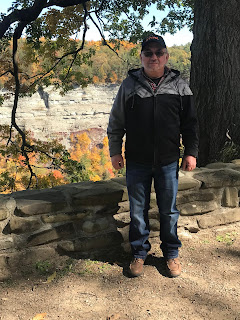 This morning, Tim and I got up and headed out the door for an adventure. We've been doing a lot of work lately, and as Jack Nicholson can attest,
'all work and no play makes Jack a dull boy.'
Disclaimer: No axes were involved.) 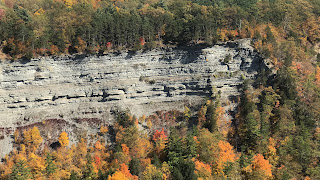 This is Letchworth Park, in New York State, a 2 1/2 hour drive from where we live.
It is primarily known as the home grounds of Mary Jemison, who had been taken captive by the Seneca Indians. She lived with them all the rest of her days and because she spoke English became a negotiater between them and the government. She is buried at Letchworth Park, at the site of the old council grounds. 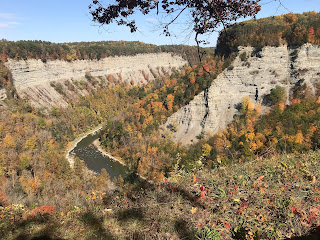 It was a beautiful day.
Some of parts of the trail we were on got quite exciting.
This was a drop off on both sides... 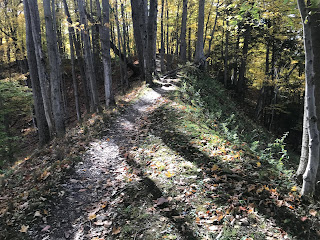 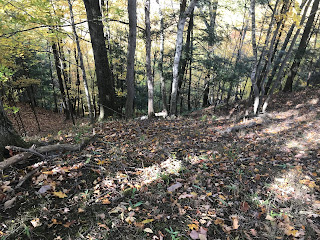 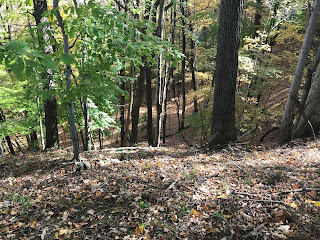 The pictures don't quite show how steep the drop offs were on both sides of this section of trail. There was a terrified looking girl clinging tightly to the side of a tree. I understood her queasiness, being a bit of a nervous nelly about heights myself.  I have a weird knee that can give out suddenly if I set my foot wrong on uneven ground, so I was especially mindful of the footing here.
We met many groups of people taking selfies of themseves posed in the woods in fancy clothes. We met one woman in high heel sandals. There was a boy probably William's age having quite a fit. I'm not sure how far he had walked but in his mind, it was a bit farther than he wanted to walk. He was shrieking at his parents for quite some time. He had a large stick and was beating signs and trees and having his tantrum. They spoke quietly to him. At one point, he roared "I AM NOT ACTING LIKE A BRAT!" Look at the size of this tree. I parked Tim in front of it so that you'd get an idea. Tim was sure that it had to be 400 years old.
Think of it.
It had stood there on that tall ridge before we were a nation.
It stood there as Mary Jemison walked by.
It stood there as the CYC built the stone walls and dug out the stone steps, and carved out the 66 miles of trail that endure still.
All the seasons ticking off, year after year after year.
It looked quite healthy despite the fact that it had been struck by lightning at least once.
Coming back, Tim suggested we walk down to the highway and follow it back to our car, since the trail had been so challenging. We went down to the road, came to an intersection, checked our map to locate the entrance we had come in, and headed smartly off making good time. But...it did not look familiar. We got to a visitor center and sat down with our map once again when it occured to us. We had driven to the Portage entrance, but a sign directed us further down the road to the Castile entrance. We were making good time in the wrong direction! But it was a beautiful day and a fun walk. We were admiring the view when a woman asked Tim if he would mind helping her back her car out. A large truck had pulled in next to her blocking her view and she was afraid to back out into  the traffic. Tim went off to help her, and while he was at it, he verified that we were headed to the Castile entrance. She affirmed it, and then told us to hop in, She was headed to Inspiration Point, and she dropped us off less than a half mile from our car.
All's well that ends well. 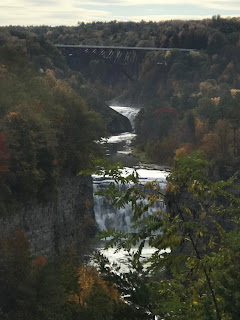