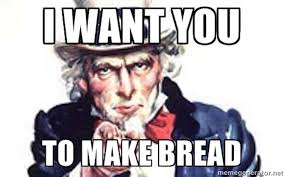 I bought new yeast today.  I am happy to report that my starter bubbled and frothed and when I added the flour, magic happened just like the magic is supposed to happen.

Let there be bread~
Tim got a doe this morning. Venison for the freezer.
We had fajitas for supper, and William was just too full to eat an entire fajita. "It's too much!" he complained. Repeatedly. In an aside to his grandfather, I said, "Bet me that he'll be asking for a piece of cake within five minutes." William walked into the room from scraping the remains of his fajita in the garbage and immediately said, "Can I have a piece of cake?"
(Did I do good, AC?)
Posted by Debby at 6:55 PM