I learn a lot from reading blogs. One of Northsider's favorite movies is 'Shadowlands'. I have to admit there are a lot of movies that I never had the chance to see, and reading about this one, I didn't remember seeing it, and decided that I should. So, off to the library I went to borrow it.

I did like the movie very much. Truth be told, I believe that I did see it, long ago in the dying days of my last marriage. I did not know the end was so near, but recognized the fact that it was mortally wounded. I watched that movie, and I remembered crying at the ending, touched at such a great love, recognizing that my own 'love story' fell quite short.

Though I vaguely remembered seeing it, I'd forgotten most of it, so I watched it again, and was moved. I still cried at the ending, but felt no need to compare.

I noted that I'd seen it to Northsider and somewhere along the line, someone mentioned 'The Inklings' in the comments. I can't remember who, and I don't want to try to figure it out, but whoever you are, thank you so much.

The book had to be obtained through an interlibrary loan, coming in from Erie. It is a tattered blue covered book that had not been checked out since 2014. What a treasure it is! Someone has underlined the things that appealed to him. Lewis was a walker, and he believed that "all weather had its attractions". The unknown reader had underlined that sentence and wrote his own note quoting Thoreau (I had to look it up, even though I have Walden upstairs on a shelf): 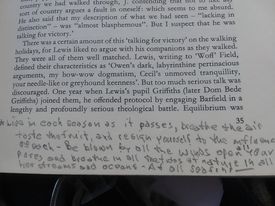 I have often wished that I was one of those folks who could quote things off the top of my head.
I can't. My undisciplined mind wanders freely.
So anyways, here I am, on page 55 of a book that requires me to read with a phone in my hand for easy access to Mr. Google. I am enthralled with the conversations between Lewis and Tolkein. The very thing that turned Lewis from his childhood religious upbringing was the very thing that made turned me from a believer to a non-believer. It was pretty mindblowing to discover this. Tolkein patiently dismantled Lewis' arguments, which set him on a path of rediscovering his own faith.
What a moment! To be standing under a tree as a wind stirred on a quiet day, bringing down a shower of autumn leaves as your mind grapples with a completely new paradigm.
I don't have a lot of time to devote to reading such a book, but Mattie called me today. There's been a problem after Rudy's last surgery, and he needs to go back down to the Pittsburgh Hospital. She hasn't been able to find anyone to drive them. "Sure," I said. "It's not a problem. I will be glad to."
She was so relieved.
I will selfishly admit that a big part of it was to be able to sit in my car and read uninterrupted for a huge block of time, googling, studying, returning to my book is something that I'm very much looking forward to.
As exciting as it is to be reading about The Inkling, I also can't help but feel a sense of kindredness to this unknown soul who underlined and made margin notes in that old book.
One final thing. Warnie Lewis quoted Wordworth on the occasion of his retirement from the military. 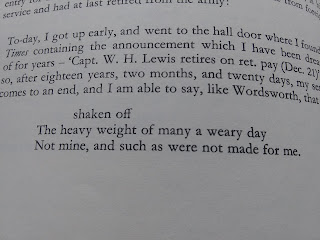 And I was struck by their perfection.
They fit retirement.
My days are now "made for me", and I like that very much.
Posted by Debby at 8:50 PM