Today William and Tim went up with a hundred pounds of corn to feed the deer. We're thinking that this will be the last of the grain we have to buy. We have had a couple 40 degree days this week and next week we are slated for two 50+ degree days. The snow is melting off and the deer should be able to find food on their own again.

After they fed the deer, grandpa had to do some measuring at the old house that we are using for storage there. It will always be interesting to me that people will simply walk out of a house and close the door and leave everything behind. People do though. The last two houses we have bought were left like that, chock a block full of stuff.

The core of the little house was built 150 years ago, but since then, the house has been added on to. An addition on the back, and then a second floor with two small bedrooms in the front. In the back there is an attic that runs the entire width of the house.

Weeding through that stuff has been a slow process, mainly because it is dark in there. Also because there are snakes in the walls and I am terrified to be poking around and finding one (or more). It is about half done, but the finds have been pretty unremarkable really.

In any case, Tim was up there today, doing some measuring, William at his side.  He pulled up a couple floor boards to look at the studs underneath to get an idea of how the place was built and much to his surprise he found this toy gun tucked away. 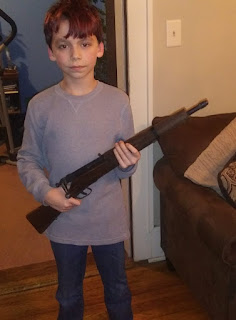 Tim was quite excited to find it.
It has a working bolt action.
It even has a wooden shell chambered.
He had never seen a toy quite like it before.
William was also pretty excited.
They declared work was done, and they came home with their treasure.
I looked it up and very quickly discovered what it was. 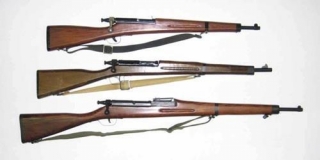 William's rifle is the top one.
The sling is long gone, and the front sight has been knocked off.
It was made by the Parris Toy Company and dates between 1945 and 1950.
The history of the Parris Toy company was a good read:

The history of Parris Manufacturing Company is a very interesting one. At the start of World War II, when draftees by the thousands were being sent to the Army and Navy training camps, there were no rifles available for training purposes.

Parris Manufacturing Company, already an expert in woodworking, was asked by the Department of Defense to make dummy training rifles for new recruits to use until real rifles could be made available. More than 2 million of these training rifles were made for the Army and Navy and the Company earned the coveted Army-Navy “E” Award for its contribution to the war effort.

After the war was over, the company switched its production lines over to manufacturing toy rifles and pistols. These toy guns were made with the same skill and care that the company had used in making the Army and Navy training rifles.

Grandpa and William worked together today refurbishing that old toy. They sanded the rust off the metal work together with fine steel wool. Grandpa gave William a tiny paint brush and some matte black. William is a funny boy, afraid to make a mistake. We really work hard with him when he is with us, teaching him that he is a capable child and that all mistakes can be fixed.  He reluctantly began the job. Grandpa stood back and waited.  William painstakingly repainted the metal parts black, gaining confidence as he worked. He did a very good job. After the paint dried,  his grandfather showed him how to restain the wood. He listened intently, worked carefully, and the end product was totally the work of his own two hands.
He is very proud of how it turned out.
"He's always going to remember this day," I told Tim.
Tim smiled.
"That's a very cool gun," he said.
I smiled too.
He knew damn well I wasn't talking about the gun.
Posted by Debby at 9:19 PM