The garden is winding down to a close. At the end of the season, it is always nice to look back and decide what needs tweaking for next year, and what did well.
Pumpkins did great. I had pumpkins all over the place. I also had pumpkin vines all over the place. They wanted to take over the entire garden. I was hacking back the vines and tossing them over the fence where they took root and continued producing more pumpkins. It was interesting to me that these pumpkin farms just let the pumpkins sit in the fields, and families pay money to wander through said fields and pick the pumpkin of their dreams. In my garden, pumpkins had a tendency to rot. We set them on a pallet, but still we lost about half of them.
I was discussing this situation with my daughter in law who reminisced about the time they went to one of these pumpkin farms. It was warm, and the pumpkins were literally exploding in the field. So...I guess we were lucky. Nothing exploded.
We did have one not so funny experience with the pumpkins. Tim was headed up to the retirement property to do some recon work (deer season is coming). I asked if he would mind picking up a few pumpkins for me to deliver to my grand daughter. Later, when he was home, he said, "I got three nice pumpkins for them." I asked him where he put them, and he said that they were in the car. I said, "Let me grab those out of there." He said that he would take care of it. I thought no more about it.
(Morgan Freeman voice-over: "But he did not take care of it." )
Three hot days later, the pumpkins had baked nicely, and let me tell you, the car did NOT smell like pumpkin pie. Tim was outraged. I was bewildered. "I thought you said you'd take them out of the car." and he replied, "I didn't think that it would get that hot."
I swear.
Anyways, carpet cleaner and febreze finally took care of the awful smell, although it took days.
So pumpkins were a success. Well. At least the growing of them. Take-away lesson number one: figure out how to store pumpkins. Also maybe give them their own designated pumpkin patch and let them go nuts away from everything else.
The tomatoes were a success as well, although we know now that we need to build wooden cages. The wire cages are just not sturdy enough to hold them up once they become heavy with fruit. So that's take-away number two. I found some simple ones that we can build using one bys from the Amish. They fold up for the winter, which will be very nice. 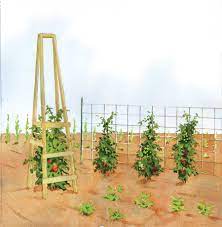 This should at the very least, double our tomato harvest. Another thing I learned? More beefsteak tomatoes.  And...ain't NOBODY needs as many cherry tomatoes as I planted.
I planted navy and black beans for the first time. They went nuts as well. They were fun. William enjoyed shelling them. Take away, quadruple the black beans, double the navy.
Potatoes. For the past two years we have been planting in tires. Our friends swear by this method. They just flip the tires, harvest the potatoes, reset the tire, and shovel the dirt back in. This has not been a successful thing for us. Next year, we go back to planting them the old fashion way. We are also going to try planting our potatoes in the fall, as well as planting our onions then as well (thanks for that tip, Northsider.  It would not have occurred to me.)
Cabbages are the unexpected success. I had planted two cabbage plants last year, but they were nibbled down. I planted two more, but they were also nibbled down. This year I planted two more, without any real hope. Quite amazingly, we did not have a problem with groundhogs this year, and the cabbages grew. So did the other cabbage plants. I had cabbage everywhere. I harvested my first one, and it was wonderful. It was amazing to me that you can leave the roots winter, and they will set up for next year all by themselves, so we will be planting them near the place where we planted 18 asparagus roots in the spring of 2020. (I am keeping the faith, Ed.) They will be part of the permanent garden.
The pepper plants continue to produce abundantly. Chiles, jalapenos, and sweet bell peppers. The bell peppers grew chest high, which I have never seen before. They were from seeds I got from an Amish pepper, and I have more. I picked half a bushel of peppers yesterday, and as long as it doesn't frost, I will have that many again next week.
Zucchinis were great. I think we'll plant one summer squash plant next year instead of multiples, and plant more zucchini.
Corn was, once again, an abysmal failure. We cannot grow sweet corn to save our souls. Next year I'm going to try planting it in a square patch instead of 3 or 4 rows.
The great vegetable harvest is winding down and the great meat harvest is gearing up. I'm pleased with the garden progress.
Any gardening suggestions for next year? Leave a comment!
Posted by Debby at 10:08 AM