I was working at my desk, and looked over to see two supervisors. Turns out they were there with a written warning due to my two missed days of work last week.

They said sympathetically that they knew. 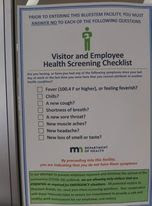 It's a strange thing, but I was dead calm.

The paper was set in front of me. I said, "I'm not signing that. I was sick. I sought medical attention and provided you with the documentation. I was following the directions that we have on the doors."

The attendance policy was explained to me once again.

I explained that I understood the attendance policy, but I had been sick. The signs on our doors list symptoms. If we have them, we are not to come inside. I followed those instructions, and provided documentation. The paper remained on my desk. I made no move to pick up my pen.

In the end, they took their paper and left. I went back to work. Understand that they had not been mean, either one of them.  It wasn't personal, it was just that rules are rules and the company I work for has a reputation as being pretty brutal about the rules.

Later, the supervisor came back and said, "I have forwarded your concerns."

I'd been thinking too. I said, "Listen, I'm not trying to be a pisser about the whole thing, but I believe that I behaved responsibly, and if this is going to become a big deal, I'll just quit."

And here's the weird thing. These words were calm, and they were true. I guess that being at the end of your work life makes choices like these a little easier. I can't imagine that I'd have been so fearless when my kids were young, or in college, or when Tim and I had bills, or the one hundred and seventy-eleven other reasons that I always had for working as hard as I could, as fast as I could, as long as I could.

But  that's done now. There's a certain power that comes from that knowledge. So I said what I said, and I meant it. "If this is going to turn into a big deal, I'll just quit." And we both looked at each other matter of factly.

It's a strange feeling, to be at the end of your work life. Today, though, it felt good.