Going back to work is going to put a crimp in that, but my daughter works at the same company at a different job. Her department is not part of the six month extension so she will be done on the 17th. She is going to take over the running the food pantry in my stead. We have a pretty decent little system set out, and she understands it.

Tomorrow, I will go there for my last stint at the pantry for 6 months. The company called and is ready to start workers on the 10th (as opposed to the 17th). They increased the starting wages substantially as well.

I had questions and so I asked them, being the no nonsense person I am.

The woman seemed to like that a lot. "Since you spoke plainly to me, I will speak plainly to you," and she answered my questions. I listened carefully and read between the lines.

The company that I worked for had been very demanding and very competitive. They had 'standards' and if you did not meet the standards, you would lose your job. Period. That's how it was. However, if you were a person that the supervisors liked, they had a lot of latitude. They could do little things to tweak your scores and help you keep your job. If the supervisors did not care for you, they didn't help you. You sank or you swam, and many people were 'walked out' (fired).

This created a pretty tough work environment, a lot of back stabbing and jealousy and trickery. I hated it, really, and I am pretty vocal when things are not fair. None of these things endeared me to anyone, but there are not a lot of job options and I liked my weekends off and my regular shifts, and because I was a hard worker, I could easily make standard and collect performance bonuses every week. So I stuck it out.

Now that company is 'gone', bought out. The decision has been made by the new owners to shut the place down. There is a lot of anger there from the present employees of my old department, most of whom were laid off on April 5th. There is a small skeleton crew left, but apparently, they can't keep up with the closing work.

So...they are looking to hire former employees back but a lot of those employees are disgruntled employees, people who are very bitter about their time there. Add that to the fact that most of them have gone on to other jobs...well...it sounds like people are not chomping at the bit to come in and help the new company out of a tight spot so they can close the place up and the high wages are a desperate attempt to get people who know the job to do the job.

The HR person explained it to me in HR terms and I listened and translated it in my head.

When she was done, she stopped.

I cleared my throat. "I understand the bitterness, but in the end, I have always thought that working at the company was a symbiotic relationship. Right now, you will be using me, which I understand. I also understand that when you no longer need me, I'm done. But I'm also using you. The extra money will be a nice thing, and when this is done, I'll be ready to retire. I guess I'm a pragmatist."

She said, "I wish I could find more of you."

I've been thinking of this all afternoon. It's a big loss for our little county to lose one of its major employers, but it's happened before. I'm not minimizing the pinch to others. Our population has steadily declined since the 1970s, and it is directly due to business closures and declines. People leave to find work elsewhere and it is sad. However, I have no power to change what is happening. All I can do is position myself to best meet whatever comes next.

So Monday, I'll go back to work.

Until then, I've got stuff to do. The food pantry tomorrow. I'll also be waiting for a call.

On Thursday, I'm running an Amish family and their child to Pittsburgh Children's Hospital for some pretty serious surgery.

Friday, I'll transport everyone 3 hours back home as soon as the baby is released. I honestly don't ever think I'll get over the fact that brain surgery can be done as an overnight surgery.

Some time on Wednesday, their neighbor will get the call about the surgery time. She'll come down to tell them, they'll go up to her house to call me and let me know what time I need to pick the three of them up.

Between dropping my family off at the hospital and picking them up the next day, I will have an evening in the big city all by myself.

The gentleman taking my room reservation was proud of his city. He was quite a talkative soul (like me). I think that he thought that I was a country bumpkin, afraid to go out into the city. I assured him that while I wasn't wild about driving in the city, I was planning to get out and do some exploring on foot. I also said that I planned to scope out ethnic restaurants.  This delighted him. He asked questions and provided suggestions for tours of some old homes and buildings nearby. He also had quite a list of suggestions for restaurants.  Indian, Korean, Thai, Japanese, Mideastern...it's been a long time since I had such a variety of cuisines to pick from. It feels luxurious.

When the baby is released Friday, I will be waiting there to bring them all back home where seven brothers and sisters and their anxious grandma wait for them. Once we are all unloaded, and the baby tucked back into the life he knows, I'll head back into to the life that I know.

Tim and I will spend the weekend putting the finishing touches on the the garage. 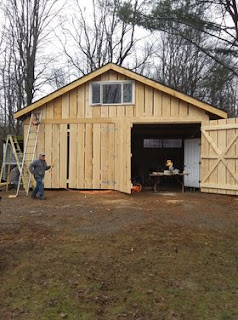 We'll make the cut on the left doors so that they will now swing open so that we will pull the old Farmall out and drive it down the road to my sister's place to hook up the rototiller and get our garden tilled and the dump truck of mushroom mulch worked in. I didn't get to plant my potatoes last week, so I will get them done this weekend.

At some point between the building, and the tilling, and the planting, I'll get a chance to talk with the kids for mother's day.

It will be a busy weekend, a lot of loose ends to tie up. On Monday morning, both Tim and I will head out the door to work.