Hey, everyone, meet Bob. (Disclaimer: I am not a photographer) 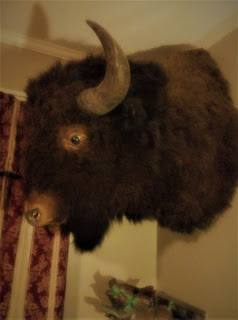 Bob hangs in the library. You don't get a real idea of his size, because he's not shown with anything to compare him to...like the loveseat beneath him. His neck is probably 3 feet high from top to bottom. His head is full of concrete, so he's a a big fellow and a heavy one too. You'll just have to take my word for it.
Now, Bob is Tim's fault. I mean, I know I'm the one that agreed to take him, but it was because he always guesses what he's getting for his birthday. And so when Pete, a fellow I worked with said, "Say...you wouldn't want a buffalo head, would you?" the very first thing that struck me was "By golly, Tim will NEVER guess what he's getting for his birthday this year." And so I said yes.
Turned out that Pete had been hauling Bob around for years waiting for his chance to hang him on the wall. After many years of marriage, he finally decided that when his wife said no all those years ago, (and many more times in the intervening years) she meant it. He gave up and began looking for a home for Bob.
Long story short, I had no idea how large it was. (The neck at the base is about 3 feet from top to bottom.) In the old days, taxidermists filled the heads of the mount with concrete, so Bob is pretty hefty. But Tim did not guess what I got him for his birthday that year. He was also tickled pink with it. He drove it all over creation to show people what he had in the back of his truck.
That is how we came to have a buffalo in the library, and we love Bob. We decorate him at Christmas.
He's totally out of scale with the dainty white sofas in the room. If you sit on the love seat, he looms over you in what might be construed as a menacing way if you are a person who has a nervous disposition. He doesn't go with anything at all in the room, really, but he is a buffalo with a story and God help me, I cannot resist something that comes with a story.
The story is: Pete's father got the thing from an estate sale of an extremely well to do railroad person.
Now back when the transcontinental railroad was built, buffalo hunters would kill scores of buffalo from the moving trains. There was a demand for the hides, but the meat was left to rot. Later, they would come back to collect all the bones that they could find and put them on trains headed east where they were made into fertilizer. The buffalo (scientifically a bison, but generally referred to as the 'American Buffalo') was hunted to the very brink of extinction. 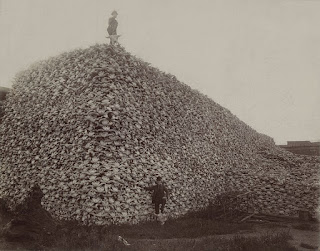 Buffalo skulls, circa1870s.
Of course, this extinction also led to mass starvation of the plains Indians, who relied on the buffalo meat to feed their people.
But Bob did not wind up as a coat for someone. His bones (well, at least his skull) did not wind up being made into fertilizer. There was another kind of hunter. Rich men would take train excursions out onto the prairies and they would shoot buffalo from luxurious and well appointed train cars, drinking good liquor and smoking nice cigars. Bob is a trophy from one of those trips, according to the story.
The things that back up this story is the mount itself: The concrete filled head, the wood that the head is mounted on attests to its age. That was the way that taxidermy was done in those days. It was also extremely expensive, which made it exclusive to only the very wealthy. The fact that Bob was bought off the wall of an estate owned by a wealthy railroad man. While there's no way to verify that story 100%, we know that Bob is an American buffalo, and a very old fellow, with at least 140 birthdays behind him.
Bob is going on a field trip today. William will show him to his classmates, and we will talk about a clash of cultures and the misery that resulted from it. The mass killing of the buffalo was seen by the US government as a way to control pesky Indian populations naturally.
Our little 5 minute presentation will end up with some local artifacts found right here in our own area. The grinding stone that my sister found while moving dirt. The hide scraper I found. Arrowheads. The fact that you can go to a field in Irvine where the Indians summered and find the dirt still littered with the knapping of years and years of making flint arrowheads and tools as the Iroquois summered together at the place where the Brokenstraw creek and the Allegheny River meet.
We are lucky to live in an area where you can find history while planting your tomatoes. It's sad that most kids have no idea. Bob aims to teach them. 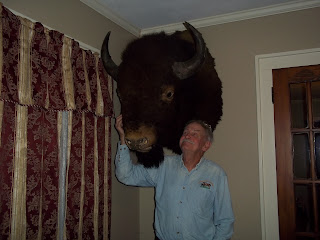 Oh look! I found a picture of Pete, aka 'he who cannot hang buffalo at his house'.
(Note to Bob: You probably need to make sure your wife is on board with your 'inheritance'. Pete and his wife are a very happy couple. I think probably the only thing they ever disagreed seriously on was that darn buffalo. )
Posted by Debby at 11:17 PM