Never one to let grass grow under her feet, my daughter picked up her suitcases, one street cat (who has seen more countries that most people) and set off last night to her husband. It's a long trip, and involves planes, trains, and a ferry.

This covid stuff has complicated everything, and following the events of Europe, It feels like she's just one step ahead of another covid shutdown no matter where she is, or where she is headed next. Being an American further complicates matters. We are the modern day equivalent of lepers.

We messaged back and forth last night until the plane took off. I knew that it would be hours before we got our next update.

I put my cell and the house phone on my bedside table last night and when I woke up in the middle of the night (never you mind why), I checked my phone to make sure that she hadn't messaged me, or put a status update on facebook.

In the middle of that, I noticed an small exchange between a friend and 'Alisa'. Oddly worded, it said to the effect that he was a very interesting man and his posts were always fascinating, and that she'd tried many times to friend him on facebook but could not (??????). She asked him to send her a friend request.

The language made it clear that English was not her (and that's even questionable) first language. I clicked her picture and saw a facebook page that had been very recently opened and had no other posts on it. Just a photo of a beautiful woman mischieviously sticking her tongue out at the camera.

I went back to the post and 'Bud' had just politely answered, 'Thank you. I will do that."

There was a pleased reply that expressed her anxiousness for him to do so.

Every party has a pooper.

I typed "BUD! DO NOT SEND THIS WOMAN A FRIEND REQUEST!"

And he sent me an innocent IM. "Why? Do you know Alisa?"

Thus began a flurry of messages in the middle of the night.

and "Bud, look at the way that's written. She's not a local gal."

and "Go to her profile. It's brand new."

and finally, "Have you EVER in your life not been able to send a friend request to someone?"

Long pause. He finally said, "I canceled that and blocked her."

I said, "Good." and tried to comfort him. "I get stuff like that all the time. I never friend someone I don't personally know.'

He said, "I get a lot of friend requests from Nigerian princesses who send me their runway model pictures."

"Yeah," I said. "and then you find out they are fabulously wealthy but need someone outside the country to help them get that money past a corrupt government."

I set my phone down on the night table and laid back down in bed.

It's another very gray day here. I woke up to an update from Cara and a bulletin that we've got our first winter snow storm on the way starting at 6PM tonight, ending tomorrow at 7AM. We will likely have our first fire tonight, which will be nice.

Halloween is done now. We had a total of six of Trick or Treaters, with three of them related to us. Those goblins got to come into the house. 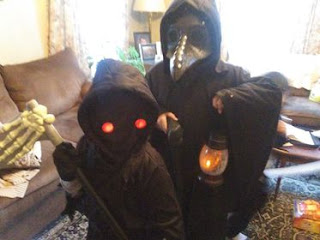 My grandson William is in the back. He was a plague doctor. It will be interesting to hear how trick or treating went. He's been very interested in the Black Plague, and the 'doctors' and is filled with a number of interesting facts. He's just waiting for someone to ask a question. They will never get him off their porches.

We had a lot of candy. Our quiet little brick street does not normally attract a lot of visitors, but we wanted to be prepared. It's been a rough year to be a kid. They've had to give up a lot.  When we had just three trick or treaters show up at nearly the end of the things, I said, "Set your bags down", and then dumped a double handful of candies into their bags. They were greatly excited about it, because it certainly was a LOT of candy scooped into their bags.

With that, Halloween was over, Cara's bound for the next place she will belong, I saved a friend from a princess and winter's coming. That's a lot to take on in just one 24 hour period.