This morning, Cara sent me this little snippet. 24 hours ago, she was on a train in the Netherlands. 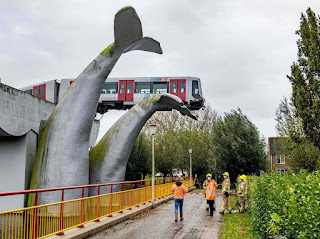 A Dutch train burst past the end of its elevated tracks Monday in the Netherlands.

But instead of crashing to the ground 30 feet below, the metro train was caught — held aloft by an artist's massive sculpture of a whale's tail. Despite some damage, no injuries or deaths were reported.

The sculpture at the end of the tracks was given a prescient name: "Saved by the Whale's Tail," according to France 24. It was built in 2002, installed at the De Akkers station in Spijkenisse, a city just outside Rotterdam.

It's unclear why the train didn't stop. The partial derailment is under investigation, and the train driver was the only person on board, according to The Associated Press.

The driver was questioned by police and sent home, the local emergency service said Monday afternoon.

The train will spend the night on the whale's tail. On Tuesday morning, workers will attempt to lift the train to safety by using slings, local authorities said.

"It's like the scene of a Hollywood movie," said Ruud Natrop, a spokesman for safety in the Rotterdam-Rijnmond area, according to The New York Times. "Thank God the tail was there.

The architect who created the sculpture, Maarten Struijs, was shocked it held up.

"I am amazed that it is so strong," Struijs said, according to The Guardian. "When plastic has stood for 20 years, you don't expect it to hold up a metro train."

I have worried about a lot of things when Cara travels, but I have to admit, I've never worried about a train running off the track and being caught by a whale's tale. It would appear that I have been remiss.