Thanks To Lady M

One of the interesting things about blog surfing is that there is always new things to learn. I can drink my morning cup and take a short trip around the world. There's always some darn thing that I've never heard of and I usually wind up tumbling down a 'rabbit hole' as I google for background information.

One blog is Magnon's Meanderings. One recent post referred to his prized bramley apples and Lady M.'s masterful creation of something called a Tarte Tatin. Never having had such a thing, but having an abundance of apples from our own trees, I slipped off down another google rabbit hole. It sounded like something that I could manage. I printed off a recipe for myself.

Yesterday was an overwhelming sort of a day. I kept myself busy and away from the television set. But then the laundry was done, and the cryptogram was done, and I studied next weeks lesson for awhile, and organized the bedroom, packed away the camp linens for when we open things back up in the spring.

Running low on entertainment, I remembered my recipe.

It took me a while, but I went carefully step by step. My apples were small, so I did a lot of peeling, and a lot of arranging. 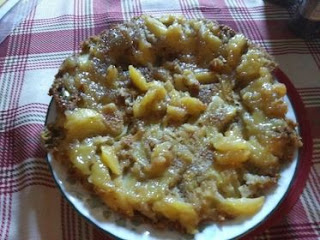 It is a rustic dessert, I've read.Mine is probably more rustic than most, because when I went to tip it out of the cast iron I nearly lost the whole thing.  That part, I'll have to practice a bit more. It's not pretty.
I discovered a solitary pack of tenderloin venison in the freezer from last year. I thought I had cleared it all  out to make way for this year's venison. Apparently, I missed one.  I  made a nice broth and let it simmer to make a gravy with.  I served it with mashed potatoes and some beans I'd frozen and tucked away for the winter.
Tim walked into the house after work he said, "It smells good in here."
I said "I tried a new recipe." He looked a little wary.
(My last experiment was Butternut Squash Soup. Turns out Tims are not fans of butternut squash soup.)
When he pushed away from the table today, he said in a very satisfied way, "Boy, that was great!
I said, "It kept my mind occupied."
He never complains about what I cook, but when he's happy with something, he makes sure I know it. Today, I knew it.
I don't think that his stomach would mind if this election uncertainty dragged on a bit longer.
Posted by Debby at 9:38 PM