Taking the Day Off 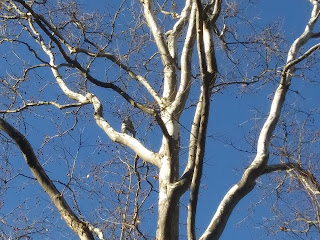 We did not work on the garage on Sunday. Tim just wanted to do something else. It has been a weekend of glorious weather. Brilliant blue skies. I just could not stop marveling over those cloudless blue skies. I tried to take a picture of it, with the white of a sycamore tree silhouetted against it to show the contrast. As always, I came away knowing once again, my phone camera is crap.

We went walking on Sunday. We went to Oil Creek State Park outside of Titusville. Home of the first world's first oil well, don't you know?

That discovery led to a 'boom' not unlike the California gold rush, with speculators rushing to drill their own wells.

The stories of those days are many. The road we travel to the retirement property was once the road taken by horses pulling barrels of the oil to the train. The horses were driven through chest deep mud until they dropped in their traces and then they were simply unhooked and new horses brought in. I don't ever drive that road without thinking of the misery of it. The old Acock Inn was built to feed these drivers, and it is where the drivers switched out, a rested driver replacing the exhausted driver who dropped into a bed at the Inn and slept until it he was waked up to take his place on another wagon. It is said that this procession ran nonstop around the clock, one wagon right after another.

When our need for oil was sated, and when oil was discovered in three other states, the value of oil dropped, and the boom died just as quickly as it had started. It left multiple ghost towns and a very damaged land that mother nature began to heal. Oil Creek State Park has nearly 10 miles of walking/bike trails that work their way though nature, while allowing glimpses of what it used to be during the 20 or so 'boom years'.

It was a nice way to enjoy a beautiful day, and we said once more, "We won't get many more days like this." We met other walkers who greeted us cheerfully, said words to the same effect. One woman said, "Oh, if I had my way, it would stay like this until May," and I replied "...and then the weather would get nice." We both laughed at ourselves.

We've had our hard frosts. We've had our first snow. And now we have shirt sleeve weather in November! I'll take it!

We didn't walk far. Probably no more than 3 miles, but it was a nice way to spend the afternoon.

On the way home, Tim said, "The garage will get done when it gets done."