We got to the retirement property with the last load of rough cut, to finish the garage. As we went to turn in the driveway, we saw a big orange truck parked and set up. It was the tree removal team.

They were partially finished with the job. One fellow stayed on the ground. He said, "I'm the 'grabbit guy', and the 'what-did-I do-with-that guy'. I said, "Pleased to meet you. I'm the 'hold-this-right-there-like-that girl." 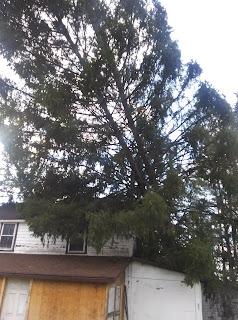 This tree above? The guy was riding in a 'cherry picker', a truck with a 60 foot boom, carrying a chain saw. As he lopped away at the big tree over hanging the house, the thing became less top heavy. As he continued to cut, the tree began to move. He yelled down to his assistant that the tree was going to 'stand up', and it did almost as soon as the words left his mouth. 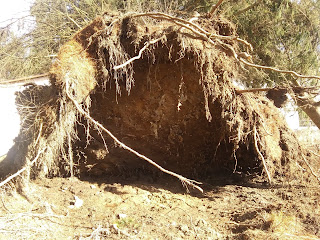 The cave disappeared once again before I ever got an opportunity to dig around in the dirt for arrow heads. We now had a 30 foot tall 'stump' heavy with branches, and way too close to the house.
All that had happened before our arrival. By the time we got there, he was hard at work on the second tree. That tree had snapped off, probably knocked down by the uprooted tree. The entire weight of it rested on the house. It had gone through the roof, knocked down the chimney, and pushed in the back of the house.
The chainsaw guy moved nimbly back and forth with his running chainsaw. Eventually, once he got the biggest branches removed from top of the tree, he climbed out of the bucket, and began climbing down that tree, lopping off branches and then sawing off the trunk in chunks, throwing the wood over the side of the house. The tree became very unstable, and it was very hard to watch him dancing around on that steep roof with his running chainsaw.
In the end, he shut off his chainsaw and studied the situation unsure of how to proceed. He had lopped off everything right down to the last 20 feet of the log. It rested directly (and heavily) on the house. 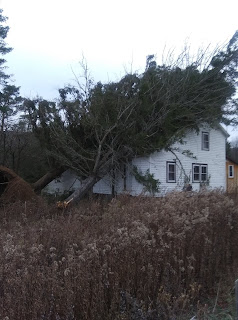 Cutting the log in two would cause the log to drop off the roof, but he was afraid that the weight of it sliding down would further damage the house, maybe cause the back to cave completely in, or for the roof to collapse. There was the additional problem that he was standing on that self same log which was standing on that damaged roof. If it dropped, he would drop along with it. If the roof collapsed or the back of the house buckled, he would take a nasty fall.
He was making his assistant a bit nervous. "Why don't you get back in the bucket truck and come down and look at it from this angle?"
And the man in high places said, "There's no climbing back up that roof. I climbed down the tree to get to where I am. The roof is too steep."
The wind had also picked up again. The gusts were making me nervous.
His buddy said, "Well, how are you going to get down?" The man in high places considered things.
I called up, "We've got ladders. Want us to run up and bring one down?"
The fellow answered, "No. I don't like ladders. They're dangerous." The three of us stared up at him. He said, "I know that sounds ridiculous given my present predicament..." which made everyone laugh. He was good natured, given that 'predicament'. In the end, he used the remaining tree trunk as a ladder, climbing down trimming the last of the branches as he came.
They roped the remaining 20 feet or so trunk off and raised it enough to clear the roof by using a come-along attached to the highway bridge. Once the tree cleared the roof, the chainsaw fellow notched it very carefully, taking his time, making the notch deeper and deeper until at last, it cracked and crashed to the ground as the man leapt backwards to get out of the way.
The last thing to worry about was that 30 foot stump that had stood itself up. The wind gusts made it clear that the whole thing was very unstable, so they took it completely down.
Anticlimactic really.
In the end, the guy charged us $500 more than his original estimate. He said, "I knew it would be tricky, but it turned out to be a lot more dangerous than I expected."
I think that he thought Tim would quibble. He didn't. That pair was worth every penny we paid them that day.