Roger and Agnes are an elderly couple we know. You won't meet anyone who knows anything more about apple trees than Roger. Agnes plays a mean game of scrabble.

They are now in a nursing home and due to the Covid stuff, they have not been allowed visitors. Today was their 75th wedding anniversary. (Try buying a card for that...you can't.)

Their son arranged for them to be brought out on the porch. The facility made cupcakes to share. And their friends and family came with cards. We sat with them for a few minutes and visited and then left to let the next folks have their time.

It wasn't perfect, but it was the best that could be done in these hard days. I was glad to see how quickly they recognized people, even after five months, even wearing our masks. I told them I felt like I was having an audience with royalty. It was pointed out that Queen Elizabeth and Agnes share the same birthday, although they'd never actually met. I said that I understood it was one of the Queen's great regrets, that she'd never met Agnes. They both found that riotous, and they laughed heartily in the same old way that I knew.

We left a stack of books and then we made our way home. I had tomatoes to process, and as I plucked them out of boiling water to peel, I thought of all the years of gardening and canning that Roger and Aggie did, working side by side, delighting in their garden, arranging their jars on the pantry shelves of their log cabin. Now those happy times are done for those dear old souls.  Working in my own kitchen, I felt very blessed. 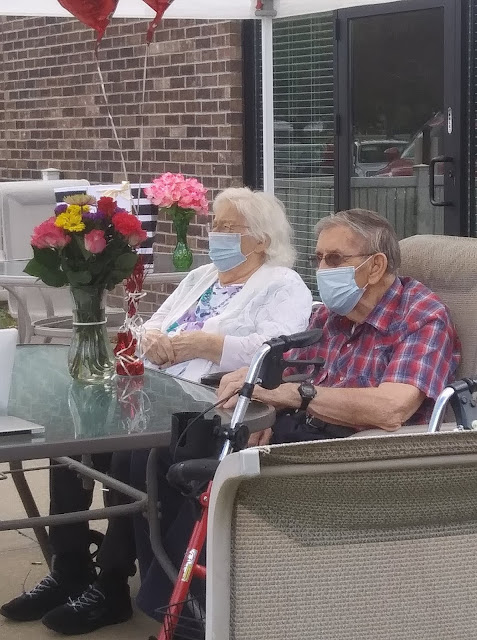