Tim and I went and picked up that chifferobe (thank you for the right word, Lori) yesterday. My cousin and I tried to remember how long it has been since we saw each other. Neither one of us could remember. It's been a tremendously long time. Tim never met her and we've been married for 20+ years. Before that, I lived in Michigan for 10 years. Before that....well...you get the idea. It's been a looooooooong time.

When we were setting this all up, I asked her where she lived.

I had no idea she was there, right within sight of MY parents' old place.

Tim drove the big truck up and I took in the familiar sights from the passenger seat.

We blabbed for a while. We've got a lot in common. Tim said, "Look at her stove." She has an antique gas stove in her kitchen. 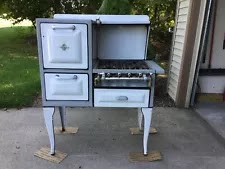 Now don't laugh at me, but I've actually dragged Tim along to look at stoves of this nature. I want one something awful, but the ones I find have an oven that is too small. It has to be able to hold my turkey roaster. When I saw Spring's stove, I had immediate stove envy. She has an Eriez, and it is a big thing with an oven that is just the size I need.

As I exclaimed over that stove, she sighed and said, "I just love old stuff, and there is absolutely nothing that can go wrong with this." I said, "Yes, that's exactly what Tim said,"

We loaded that chifferobe, and she showed me the old cast iron sink she found for her kitchen. I loved it and we talked about the house we're going to build and how we've been accumulating old things for it too.

We had an awful lot in common.

My family tree has a whole lot of broken branches. They are a hot tempered bunch, and someone was always mad at somebody. We'd go months without seeing this relative, or that. Sometimes years. Sadly it's not so different in my generation. I have never been to my parents' graves, as strange as that sounds. They are not buried on neutral land. I don't expect people to understand. I don't even try to explain it anymore.

Driving back down off the hill, I thought it was ironic that I wanted that chifferobe as soon as I laid eyes on it. It was really a powerful nostalgic wanting, a desire to capture something that is no more, I suppose. Maybe it never was at all. It gets hard to tell sometimes.

Last night, I was talking to my sister.

I told her about that wiehnachtspyramide I found. I told her that I had no earthly idea why I wanted it, but as soon as I saw it....

And she said, "Oh, I LOVE those! Do you remember that Bea had one? Remember we'd get invited to their house when they were all decorated for Christmas, and there was so much to look at, the sleigh bells and the tree and the garland and the pyramid?"

I remember those invitations. Bea and Gordie were our godparents and they decorated for every holiday, richly, lavishly. We'd never seen anything like it and it was a treat to be invited to dinner. We feasted our eyes AND our stomachs.

I didn't recognize the pyramid, at least not consciously, but I understand now why I wanted it so very badly.

Fortunately I come from a long line of two kids so our family is quite small. This helps keeping the branches intact.

Families can be very complicated. I come from a huge family that, for the most part, gets along, even with differing religious and political opinions. I think it is the "clan" mentality that has carried on in our Scots DNA -- we can fight among ourselves but we're still clan, and we rally for one another when called upon. It helped, I suppose, that where I grew up I was surrounded for miles by mostly cousins on both parents' sides. So we played together, went to school together, visited each others' homes, attended the same weddings and funerals, and, sadly, are mostly buried in the same cemetery.

And you are welcome. Glad you got your chifferobe!