After the flooding, a transformer damaged by the weather blew downtown. Since the brains to our computers are located downtown, we ended up leaving work Friday on a half day. I headed home, but stopped at the house renovation to see if the power outage extended to there. Tim's new helper was working on the exterior of the garage, Tim was roughing in a window for the kitchen, Debbie was stripping wallpaper from the dining room (a pity it couldn't be saved, because I liked it, but years of cigarette smoke in an old house nixed that.)

I spent an cheerful afternoon stripping wall paper and blabbing. It was fun. An old buffet, which is beyond repair will be burned, but Tim was looking at the legs on it, elegantly turned legs. 4 of them. Not broken. He believes he can mend the secretary desk.

We've been debating the kitchen for some time time now. It is very small, but there is an old floor to ceiling cupboard. Imagine this, without the glass fronts. It's along this line and a gorgeous focal point, however,  it takes up a lot of room but provides no counter space. By the time that you add the other kitchen appliances, you've got a tiny kitchen with very little work space.

We've been debating this for some time. 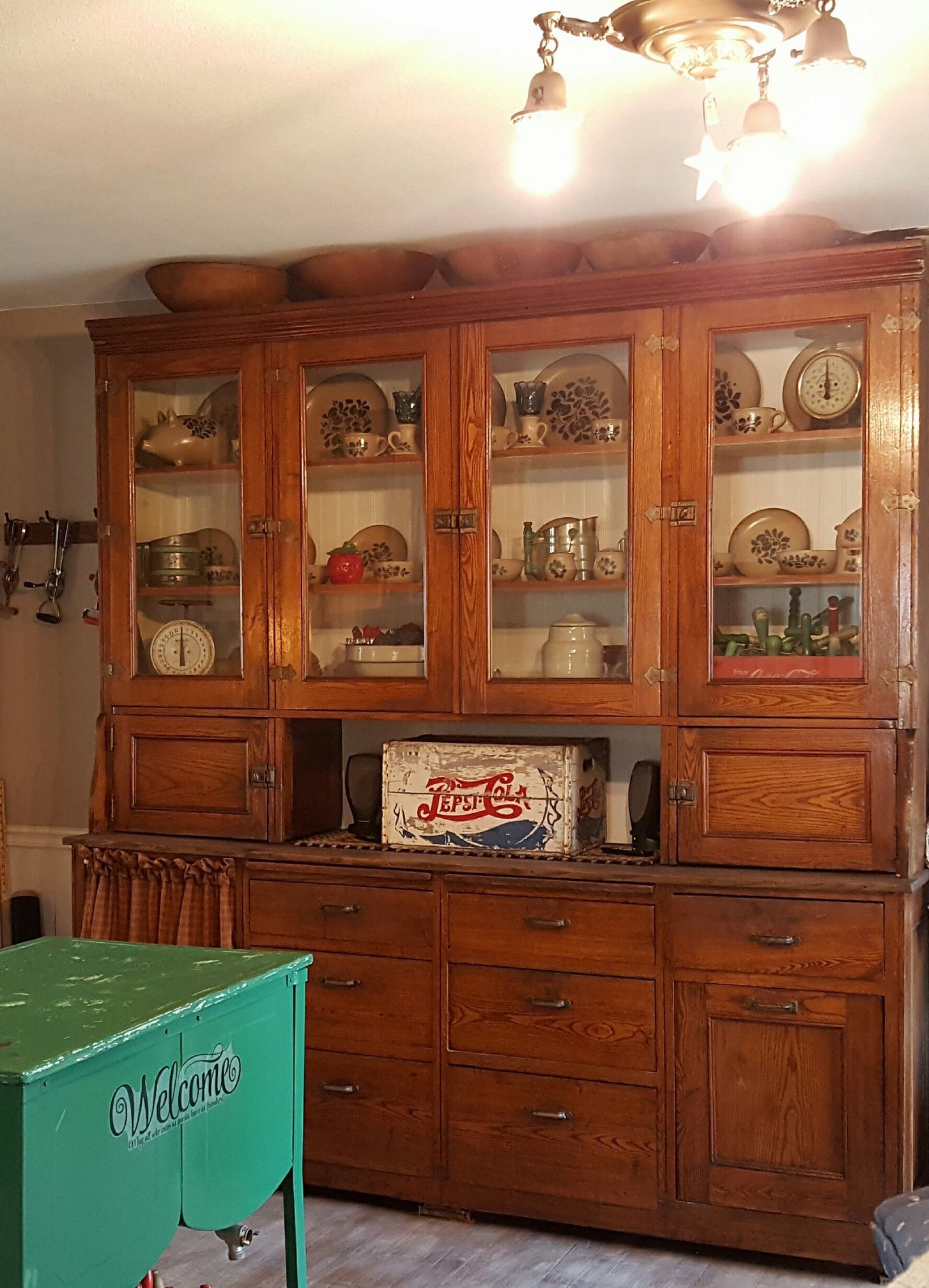 Behind this cupboard is a wall behind which is a second set of stairs leading to the second floor. Last night we decided that the second flight of stairs to the landing was not needed and that it would add a good deal of space to that kitchen. We're going to try to move that old cupboard to a new wall and knock out the wall to make additional kitchen space.

The rain has stopped and given the water some time to go down, which is good, because the rain will begin again Monday morning.

Making our hay while the sun shines, we've got a family picnic at the camp this afternoon.

Have a good weekend everyone.
Posted by Debby at 11:05 AM

We have one of those and it is the same size. I just spent a day last week moving it myself to prepare for our kitchen renovation. I had to unload it, using my physics knowledge, slide it 15 feet across a room and then reload it so that it can be out of the way for the construction project. My back is telling me I should have bribed a few more helpers.

That cabinet is beautiful and I’m so glad you’ve figured out a way to keep it.

I’m equally glad you’ll be able to repair the secretary. We have one that was in my parents’ home and my grandmother’s before that. Apparently these old pieces are not as valuable as they once were, given the current popularity of all the colorless bleached-out stuff, but it’s priceless to me. My kids are already fighting over it as if their parents have one foot in the grave! (I’m going to send you a picture of it).

love it when an enforced holiday is a double-blessing.

Bob, my kids don't want my 'crap'. Me: but the bedroom outfit upstairs was made by the Forest Furniture Company. Your great grandfather worked for them. The victorian set with the marble topped stand, that's over 150 years old. And what about the clocks. And the kids just roll their eyes.

Ed, we probably can use a supervisor. We've never done anything like this, and we're a bit worried about it.