This is kind of an embarrassing thing to admit, but I have a big house. Seriously, there are rooms that I don't have much to do with. The library has sort of been one of those rooms. It's a nice room, but it tends to collect stuff. William likes to do his legos and crafts in there in front of the fire. There was a new light fixture for my kitchen laying across the big couch. There are three of my unfinished crafts in there. Tim has a collection of fans in there that he's been experimenting with to circulate heat from the wood fire through the house.

It has nice furniture, but it's not a room we spend a lot of time in, but with all of Tim's puttering, that room now has a fireplace insert and has seen more traffic than it has seen for a while.

I had an extra day off work this week, so I spent some time pondering this room today. Tim and I came to an agreement about his fan collection (one fan migrated to each spare bedroom upstairs, where they will come in handy in the summer). Since William wasn't here today, I just moved all his stuff back into his playroom.

I studied the room and got the idea to do some rearranging. Tim was a pretty good sport about it, even though I know he'd rather do just about anything than move furniture.

One of the things in that room is a curved front glass curio cabinet, like this. 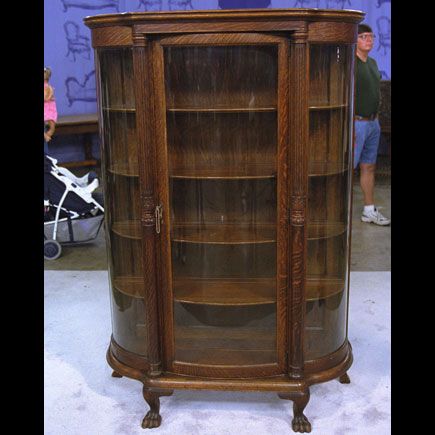 "
So I got this idea that instead sitting back in the corner, I wanted it centered between the two windows, which required emptying the stuff out of it. It's not jam packed by any means, but I forgot how much stuff was actually in the thing.

The wine glasses that I plan to take with me to Australia to toast Amanda and Sophie and her mother, four wine glasses that I got years ago on a shopping trip with Cara when she first moved to Indiana PA to get her master's degree. I remembered that day so long ago even as I anticipated a day that is long overdue, a trip to Australia. It'll happen.

I carefully lifted out my little collection of china and pressed glass critters. There was one that I meant to send to Pam. If I don't do things right away, I forget. Is this senility? I carefully set the little glass squirrel aside. I have a box to mail it out.

Cara's cup 'I love Afghanistan' I didn't, not so much, but I knew that she felt like she was making a difference. Everyone should know that feeling. A cup that Tim and I got on a trip to Dylan and Brittani's house. A little crystal salt cellar, It's a swan. It's silver wings fold back so that you can scoop out the salt with a tiny spoon. A hinged china egg, beautifully painted and hinged.

And vases. Honestly. I can't tell you the number of times I've muttered 'I know there's a vase in this house...' The tiny little crystal one from a dear friend's house, the beautifully shaped clear glass urn with the cobalt neck, the delicate glass one that a friend filled with flowers from her garden for my 60th birthday. A couple more.

The little tiny tea set for dolls. I'd found at an antique store, and bought it with a mind to building a fairy garden, which I didn't quite get around to.  At the back, tucked away for safe keeping, the bubble lights that Tim had thrilled to find. He was even more thrilled to find that they worked.

Two musical figurines, one that, as a child, I had wrapped for my father. He gave it to my mother for Christmas. Years later, as left her bedside as she lay dying, something (the vibration of my feet maybe)  set it off and it played, one slow note after another, 'let......me.......call..... ..you.... sweetheart...' and then it whirred slowly to a stop. I remembered turning to look at it on her dresser and I was comforted. All these years later, it is a comfort still.

There's another music box too. It's a testament to the love of a 100 year old man and his beloved wife. I never met her, but he was a treasure. I'm sure he was right when he called his wife a treasure too.

So many precious things, and it was a little bit shocking that there was so much that I'd flatly forgotten about.

I cleaned everything, and I replaced it carefully, smiling at a thousand different memories of other times, dear faces of friends, some of whom are no longer here.

The library is done now. The couch and the love seat look nice in their L shape.  The arm chair is tucked into a corner with a reading lamp. I changed out tables, moving one upstairs to a spare bedroom, swapping other tables from the library and the livingroom. I vacuumed and dusted and polished, and when I was done, switched off the light and stood watching the flickering fire reflecting in the glass, in the gleaming wood.

It's good to take stock from time to time. I am a very blessed woman.

I use to love to rearrange furniture. I haven't done that in a very long time. Hmmm.....

Maybe not “jam packed” but that’s a lot of stuff! Beautiful descriptions.

I'm with Kelly. We used to rearrange things quite often but haven't since we moved into this house.

I keep walking into the library and getting this little rush of pleasure. It looks very nice. I wonder if it will inspire me to keep on keeping on?

Well THAT was exciting... especially paragraph 2!!!
I too have a very big house that seems to collect 'stuff' all on its own... did the same thing to my mother. We can blame the house, right?
;-)

I do not have a big house but I do have too much stuff - according to V, especially. He is probably right, but some stuff is so hard to make that final parting gesture on, isn't it?

In fact, I even have some glasses here superfluous to requirements...

Actually, Tim can not complain. Ever. He has 3 garages and two sheds full of things. What makes him different than me is that he usually knows where he puts stuff.